On Saturday, January 28, the City of Bayonne’s Recreation Division held a ceremony to celebrate the $1 million federal grant it will receive to construct a ballfield for the Buddy Baseball program at 11th Street and Avenue E.  Buddy Baseball, a popular activity for young people with special needs, was established in Bayonne seven years ago.

On June 16 The Bayonne Chamber of Commerce had its first road trip. Michele Bryd, Director of Winners of Bayonne chaired the event where trustees and its members had an event in a skybox at the Meadowlands Racetrack.  They enjoyed a social event to celebrate summer while watching races which included the ostrich race along with the camel races. 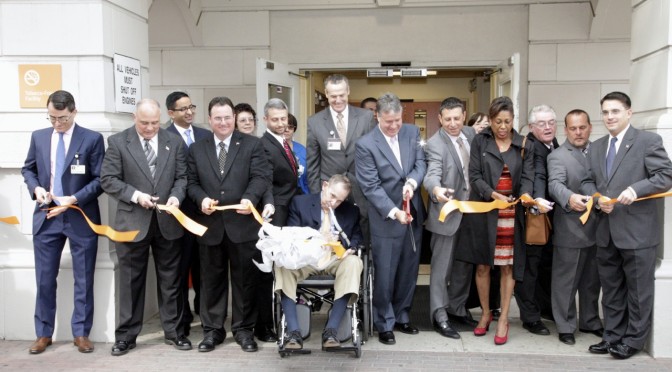 END_OF_DOCUMENT_TOKEN_TO_BE_REPLACED

Photo of Mayor Mark Smith and Team by Steve A Mack

James Davis walked into the Villa Maria restaurant in Bayonne on Tuesday night like the conquering hero, with hundreds of supporters cheering him on as soon as he entered the place.

There was good reason for the elation as Davis won the mayoral runoff election in his hometown over the incumbent Mark Smith by a 51% to 49% margin as of election night.

Davis greeted the numerous tired and sweaty followers like himself who were energized by seeing their leader give his victory speech.

“Tonight we enjoy but tomorrow we get to work,” said Davis to raucous applause. “It’s going to take everybody in this city to change this city, whether they voted for us or against us.” END_OF_DOCUMENT_TOKEN_TO_BE_REPLACED 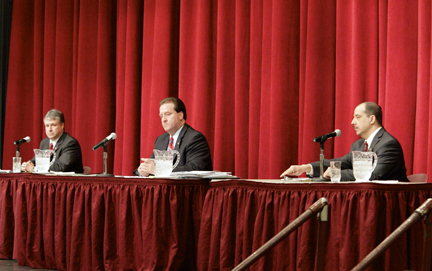 Bayonne Election for Mayor and City Council May 13th , 2014 Just around the corner

By Ricardo Kaulessar- photo by Steve A. Mack

If you don’t know who Mark Smith, James Davis and Anthony Zanowic are, then you are probably not aware of the upcoming Bayonne municipal election.

The three men are vying to get the most votes on May 13 to be propelled into the highest office in Hudson County’s southernmost city.

However, they are not the only ones on the ballot as there are candidates looking to represent each of the city’s three wards as well as two at-large seats on the City Council.

So in the final days before Election Day, those in the running for mayor and council are doing everything from pressing the flesh with constituents to debating each other in public venues in order to win.

It’s a cliché that applies not only to sports but just as appropriately to politics – in order to be number one, you have to beat number one. That applies to the challengers who seek to dethrone Mayor Mark Smith.

Smith, who has been mayor since November 2008, is running for a second four-year term.

The Port Authority advises beginning Monday night, November 11, 2013, on a temporary basis, the Bayonne Bridge will have only one travel lane overnight. The single travel lane will be in effect through Friday, December 20, 2013, to help accommodate construction activities on the bridge.  A police officer will direct vehicles to advance or halt through the single travel lane at night and in the early morning.  The traffic will alternate between hold and pull cycles in each direction for fifteen minutes from 9:00 p.m. to 5:00 a.m., Mondays through Thursdays, and from 12:00 midnight Fridays through 8:00 a.m. Saturdays.   If there is an opportunity for police officers to use shorter time intervals, they will do so. Variable message signs will be posted to advise motorists of the single travel lane.

The cost to go around the nine-hole course is $3.00 per player. END_OF_DOCUMENT_TOKEN_TO_BE_REPLACED

Mayor Mark A. Smith announced that the Bayonne farmers’ market opened  for its second consecutive year on Tuesday, May 7, from 2:00 p.m. to 7:00 p.m.  Mayor Smith said, “The City of Bayonne and the Bayonne Urban Enterprise Zone are happy to bring back farmers’ produce and other farmers’ market merchandise to our community for another year.  We are proud to provide Bayonne consumers with a great opportunity to purchase the produce that made New Jersey the Garden State.” END_OF_DOCUMENT_TOKEN_TO_BE_REPLACED

Commemorating Women of Achievement in Bayonne

Harry's Liquor's located at 295 Broadway in Bayonne, New Jersey was demolished on Wednesday March 23rd after a fire started in the building next door the night before and spread to the popular Bayonne business.