Proud to post this about Downtown Jersey City, of which my family lived there for over 90 years

Jersey City is the second-most populous city in the U.S. state of New

Jersey, after Newark. It is the seat of Hudson County as well as the county’s largest city.

The U.S. Census Bureau’s Population Estimates Program calculated that the city’s population was 262,075 in 2019, ranking as the 80th-most-populous incorporated place in the nation.

The 2019 estimate represents an increase of about 5.8% from the 2010 United States Census, when the city’s population was at 247,597, ranking the city the nation’s 78th-largest by population.

Part of the New York metropolitan area, Jersey City is bounded on the east by the Hudson River and Upper New York Bay and on the west by the Hackensack River and Newark Bay. A port of entry, with 30.7 miles (49.4 km) of waterfront and extensive rail infrastructure and connectivity, the city is an important transportation terminus and distribution and manufacturing center for the Port of New York and New Jersey. Jersey City shares significant mass transit connections with Manhattan. Redevelopment of the Jersey City waterfront has made the city one of the largest centers of banking and finance in the United States and has led to the district and city being nicknamed Wall Street West

Subscribe to River View Observer by Email
Sustainable Jersey City (SJC) Is kicking off Jersey City’s
first ever Tree Mapping Census. Our city’s tree canopy is disappearing at an alarming rate. To restore the canopy SJC is calling on you to help record existing trees, because we can’t manage
what we don’t measure!

SJC will train you to become a citizen scientist, equip you with our OpenTreeMap Smartphone App and connect you with our neighborhood captains who will guide you through the treeinventory process to record GPS location of trees, tree metrics, tree health data and tree species
ID photos.

This project is being funded as part of the Turnpike Authority’s ongoing 10-year, $7billion capital program. END_OF_DOCUMENT_TOKEN_TO_BE_REPLACED

JERSEY CITY—The biking community in Jersey City marked another watershed this week, as contractors began installing a new, highly visible green surface in bike lanes on busy streets. They are the first specially colored or textured bike lanes in the city, and among the first in the state.

Work on the surfacing began last Thursday, as city bike lane contractors Statewide Striping began laying down Endurablend, a mixture including polymer, fine gravel, and green dye, in pre-striped bike lanes along Christopher Columbus Drive. The surface is being sprayed through a honeycomb-patterned stencil, forming small hex shapes divided by thin lattice lines. The color emphasizes to cyclists and drivers that the lane is for bikes only, and the gravel is for traction, while the hex pattern is designed for better wear and drainage than solid coverings, according to Statewide representatives. END_OF_DOCUMENT_TOKEN_TO_BE_REPLACED

HCCC rated in top 15% of all trade schools, colleges and universities throughout the USA for best education, value and welcome to military members, veterans and spouses 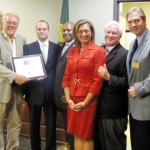 JERSEY CITY, N.J. / August 24, 2010 – Hudson County Community College has learned that the College will be named to the “Military-Friendly Schools” List. The College was chosen from 7,000 institutions of higher education across the country to be included on the list, and the official designation will be made in September. Only 15% of all of the nation’s schools of higher education make the list.