Cake Boss Star on the Rise- How Bitter- Sweet It Is… 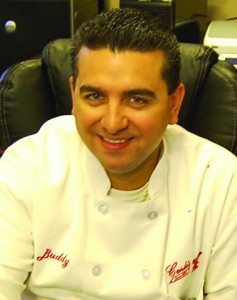 No disrespect to Frank Sinatra, but Hoboken’s bouncing a new favorite son on its knee, a charismatic cake baker who followed in the floured footsteps of his father to become the star of his own reality TV show.
Buddy Valastro is TLC’s “Cake Boss,” the guru of cakes and the driving force behind Carlo’s Bake Shop on Washington Street in Hoboken, an Italian pastry empire he runs with his mother, Mary, and four older sisters – Grace, Maddalene, Mary and Lisa. On “Cake Boss,” (TLC, Monday nights at 10,) cameras trail Valastro as he wrestles with the demands of a thriving bakery business and the antics of his kooky, close-knit, hard-working family and crew. END_OF_DOCUMENT_TOKEN_TO_BE_REPLACED
Share this: