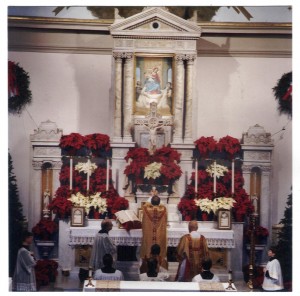 The Traditional Mass or the Extraordinary Form as Pope Benedict XVI identifies it in his Apostolic Letter “Summorum Pontificum” is celebrated in Latin according to the Missal of 1962.  This missal was issued under Blessed John XXIII and remained in use until some years after the conclusion of the Second Vatican Council.

A prelude of seasonal music by Herbeck, Praetorius and Victoria will be performed by the Holy Rosary Choir preceding the mass at 11:15 pm.  During the mass the choir under the direction of Harold Bott will sing the Mass in G by Schubert accompanied by organ and strings. The Holy Rosary Schola will sing the Propers of the Mass in Gregorian chant from the Liber Usualis. END_OF_DOCUMENT_TOKEN_TO_BE_REPLACED