The 1st and 3rd Wards in Bayonne have two new Council people elect. Agnes Gillespie and Ray Greaves  both won tonight in Bayonne’s Primary. Two of Bayonne Mayor Mark Smith’s Council running mates; Gillespie, and Greaves fell short of a first ballot victory in the May election forcing them into a run- off against Thomas Cotter in the first ward and Gary La Pelussa in the third ward.

Winning tonights primary with Gillespie  totalling  1408 votes to Cotter’s 1155 and Greaves with a total of 1623  to LaPelusa’s 1570 gives Mayor Smith’ a cohessive Council and with 6 of his running mates on the City  Council Mayor Smith can now push forth his agenda for the city. 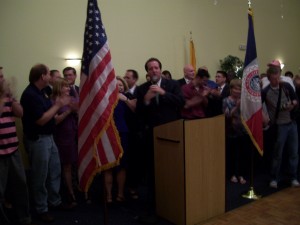 A happy Mayor Mark Smith addresses the audience at the Knights of Columbus in Bayonne after Agnes Gillespie and Ray Greaves won their council seats.
Share