“Ethel Pesin Liberty Footbridge.”dedicated in the honor of  matron of Liberty State Park.

JERSEY CITY –Mayor Jerramiah T. Healy,Mayor- elect Steve Fulop, members of the Municipal Council, and other city officials  joined with  community members for a dedication ceremony for the newly installed Jersey Avenue pedestrian bridge that links downtown Jersey City with Liberty State Park and which was washed out during Hurricane Sandy.

The bridge will be dedicated in the honor of Ethel Pesin, matron of Liberty State Park.

The ceremony  served to officially dedicate the bridge as the “Ethel Pesin Liberty Footbridge.”

END_OF_DOCUMENT_TOKEN_TO_BE_REPLACED 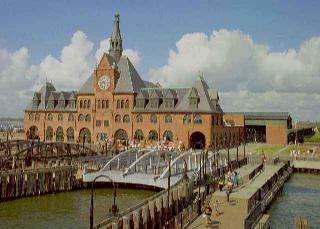 Liberty State Park will celebrate its 30th birthday on June 10th, and considering that last year alone 5 million people visited the park — this could turn out to be one heck of a birthday party. If you’re one of the lucky people who have already discovered Liberty State Park, then you might want to take a moment to honor Morris Pesin, the driving force behind turning a once-desolate Jersey City dumpsite into one of the greatest parks in America. Mr. Pesin, who passed away in 1992, was honored by President Ronald Reagan at the White House in 1985 with a Volunteer Action Award for creating Liberty State Park, the Gateway to the Statue of Liberty and Ellis Island.