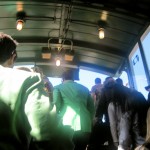 Hoboken, the Mile Square City, the home of Old Blue Eyes , the place where they played the first baseball game, where Marlon Brando filmed On the Waterfront, and today, the place where all the single folk prefer to live.

A whopping 59.9% are single with a median income of $140,780 dollars.  Those statistic are  the reason CNN Financial Website has given Hoboken the distinct title as “The Second Best City Nationwide for the Rich and Single,” beating out places like Redondo California, Brookline Mass and Arlington VA.