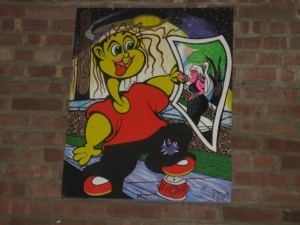 Emerging new artist John Marto aka “Johnny Pens” is unique and very talented; his ability to create cartoon drawings with the use of color pens is amazing as it is impressive. An artist in the downtown Jersey City area, Pens, inception into his art began by making small circles and lines on regular paper. As Pens recalls it, it began as just simple doodling on the Path train, but later turned into an assortment of cartoon characters.

He went from drawing on the Path train to drawing in front of his home, which would soon gather an audience of children as well as adults; they would stop in front of his home during the summer to view him as he drew. Pens began to sketch these lively cartoon characters on manila folders, and with each drawing he captured more and more detail. Framed and displayed they are artistry at its finest. 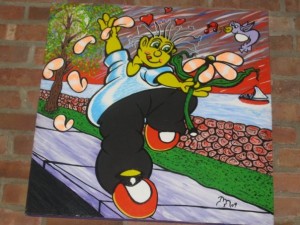 Never without his pens, has he drawn on an average of 10 hours a day. He has surmised a total of 30 paintings in one year and counting. Each drawing is unique and some when observed feature a message, with a majority that is love inspired. His drawings have attracted many and he is petitioned daily to create special cartoon characters for special occasions. Not only does he draw the cartoon, but he also adds poetry and prose to the drawing, making it an extra-special gift for whoever is to receive it.

Some of the things he has been asked to draw are clowns and baseball players which are drawn in his special cartoon form. Most recently Pens has begun to transform his artwork on to canvas with the use of oils.

Asked how he received his name Johnny Pens, he explained he always has drawn with colored pens, so his good friend Carla Anderson, from Balance-Salon for Hair in Jersey City named him none other than “Johnny Pens”.

Inspired by people he believes as an artist he is paid twice; once by seeing the end product and the other by watching the faces of the people who buy his art.”

Looking forward Jersey City can be proud to have such a talented artist, and as the future unfolds we look forward to the wonderful creations of this new emerging artist called “Johnny Pens”.

If you’re interested in viewing the artwork of “Johnny Pens” make a stop at Balance-Salon for Hair on 18 Erie Street, in Jersey City where they are on displayed. They can also be viewed on a video created by Carla Anderson. Log on to www.vimeo.com and select Johnny Pens.