Park Will Be Built For Use By Residents And Community

JERSEY CITY, N.J.  – CANCOlofts, an industrial-to-residential condominium loft building in Jersey City, celebrated the groundbreaking on Sept. 10 for CANCOpark, a public park that is being constructed across the street from CANCOlofts, at 50 Dey Street.

CANCOpark, which will offer 15,000 square feet of green space, landscaping, seating and a walking path, is expected to be complete by the end of October. The park will be open for the enjoyment of CANCOlofts residents as well as residents of the neighborhood, contributing to the already appealing lifestyle of the unique property, formerly the American Can Co.

END_OF_DOCUMENT_TOKEN_TO_BE_REPLACED 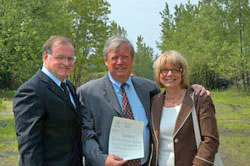