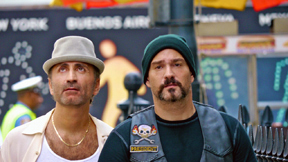 From that day on, Pogatsia set out to pursue a life not just as an actor, but as a screenwriter and director.  He wrote the screenplay THE PIZZA TAPES which was optioned and then he set out to write FAMILY ON BOARD, which went from the page to film. END_OF_DOCUMENT_TOKEN_TO_BE_REPLACED