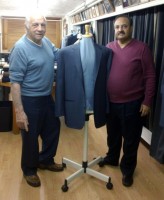 Certo’s tailor shop is filled with sewing machines and along several walls are rows of hangers with yards of fabrics like cashmere, wools and cottons. Above the hangers is a line-up of photographs mostly of famous boxers who Certo knew from his years in the ring. Sometimes they came to Certo’s shop to talk boxing and sometimes they picked out a suit. That’s what boxing legend Muhammad Ali did. END_OF_DOCUMENT_TOKEN_TO_BE_REPLACED