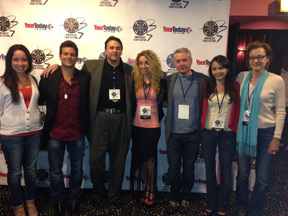 From left, Filmmaker Amanda Bedula, Best Actor in a Short winner Bill Sorvino, Best Director/Best Short Winner Sam Borowski, Best Actress in a Short Nominee Samantha Tuffarelli, Filmmaker Michael Ringston, Best Actress in a Short Winner Maria Rusolo and Best Actress in a Short Nominee Wanda O’ Connell strike a group pose on the Red Carpet at the Northeast Film Festival.
The Northeast Film Festival recently wrapped its inaugural edition, with several locals making a big splash at the Awards Gala on September 15th. One of those locals Sam Borowski, whose movie “Maniac,” was previewed in the Observer last month, took home the top honors for Best Director of a Short and Best Short for the aforementioned film. His actor Bill Sorvino, a Jersey City native, also took home Best Actor in a Short honors.
“This was an amazing festival,” Borowski said afterward. “There were not only many great films competing, but Oscar-Winners, Oscar-Nominees and multiple Award-Winners in many of the categories. Festival Director Larry Rosen did such a wonderful job of putting this together.”
The festival, run by Teaneck’s Larry Rosen and Jersey City’s Tamara Thelander was held over three days at the Maplewood Theater in Maplewood, New Jersey. END_OF_DOCUMENT_TOKEN_TO_BE_REPLACED
Share this:

“These three films were chosen across the spectrum,” Sorvino says. “The feature film, ‘Maybe Tomorrow’ is a powerhouse movie starring Michael Wolfe.  John’s film is a short documentary about the walks he took with his dog and the beautiful wildlife in Liberty State Park. It’s a great film. And Sam’s film ‘Pollination*’ packs a 7-minute wallop.’ END_OF_DOCUMENT_TOKEN_TO_BE_REPLACED

Best known as mob boss Paulie Cicero, who cooked Italian dishes for his crew in the film “Goodfellas” and many other acting roles in film, on Broadway and TV, Paul Sorvino  is more than just an actor – he’s a sculptor, painter, writer, director, chef and opera singer.  And on Thurs., Oct. 27 and Fri., Nov. 4, Sorvino’s fans are in for a treat when he takes to the stage at Loew’s Jersey City in “Paul Sorvino Sings!” a concert where Sorvino sings arias and Neapolitan folk songs and tells stories of his life as an actor. END_OF_DOCUMENT_TOKEN_TO_BE_REPLACED