A Jersey City Rally in support of Muslim and immigrant communities was held on Monday evening, January 30th,  at Jersey City’s Newark Avenue Pedestrian Plaza. Over a thousand people jammed the area with signs and chants in solidarity with other rally’s that have taken place all over the United States since the  President  signed an Executive Order  that put a halt on the processing of Syrian refugees and barred immigration from seven countries.

A temporary stay on the ban has been ordered by a federal court judge.  Rally’s like the one in Jersey City have been taken place all over the country since Friday, January 27.

Jersey City Mayor Steve Fulop spoke to the participants of the rally and mentioned “The anti-immigrant and anti-refugee issue is especially personal for me and my family. My family came to this country in response to anti-Semitism in Europe during the Holocaust. As a city, we can play a small  role in serving as a haven for residents who are seeking basic human rights, such as safety and peace.” The Mayor also  assured the crowd that ” Over the last few days we have worked with advocates of the State of New Jersey  and we will introduce formal laws to the city council over the next few days that make Jersey City one of the clearest and strongest Sanctuary cities in the State of New Jersey.”

More photos of the rally… 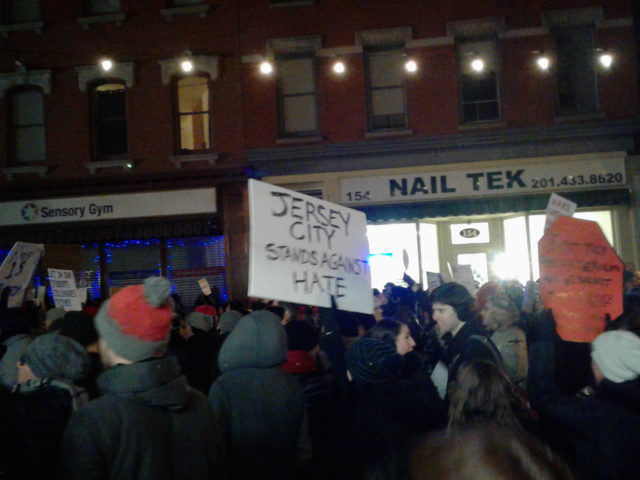