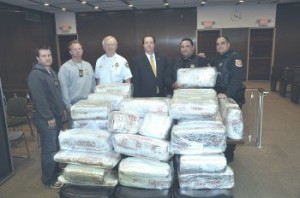 Mayor Mark A. Smith and Police Chief Robert Kubert announced that the Bayonne Police Department arrested two men on marijuana charges on January 26 after discovering them at 65 New Hook Road. The men arrested were Gordon T. Peters, 42, of Miramar, Florida, and Jason L. Peters, 21, of Miami, Florida. They were charged with possession of over 25 pounds of marijuana, and possession of marijuana within 500 feet of a public walkway. The approximate weight of the marijuana seized by the police was 595 pounds, which has an estimated street value of $2 million. END_OF_DOCUMENT_TOKEN_TO_BE_REPLACED