Film Premieres in Bayonne at Frank Theatres, Friday, May 12

“Sometimes life is like a movie; sometimes its better,” – Chuck Wepner as portrayed by Liev Schreiber in the new film, CHUCK

Like the Rocky character Sylvester Stallone created based on Chuck Wepner’s 1976 loss in the ring to Muhammad Ali, Chuck Wepner’s match with Ali has been a huge part of his life. Five years ago, the documentary The Real Rocky aired on PBS and coming up on Fri, May 12, CHUCK starring Liev Schreiber premieres at the Frank Theatres at South Cove Commons in Bayonne. Directed by Philippe Falardeau, the film follows Wepner’s life before and after his March 24, 1975 fight with Muhammad Ali. MAD MEN star Elizabeth Moss, Naomi Watts, and Ron Perlman co-star; and according to IMDB, CHUCK’s writing credits go to Jeff Feuerzeig, Jerry Stahl, Michael Cristofer and Liev Schreiber.

Live Schreiber as Chuck Wepner in the new

Bobby Rooney past away this week and in his honor we would like to rerun an article about him .

Bobby Rooney has been in charge of the Bayonne Police Athletic League’s Boxing Club for almost a decade. Prior to taking over the Bayonne PAL program from his father, professional boxer Bob Rooney, Sr., who ran it for more than 30 years, Bobby Rooney was a professional fighter. He went pro in 2003, winning the WBF Continental Light Heavyweight Title in 2009, and finishing with a win-loss record of 12-3; 7 of his 12 victories were knock-outs, 4 of the victories against previously-undefeated boxers.

Rooney’s work with the Bayonne PAL often has him rubbing elbows with top talent, and not been by coincidence. His father was a sparring partner with Chuck Wepner – the inspiration for Sylvester Stallone’s Rocky – who often offers assistance to the Bayonne PAL. Robert Terry is a recent success story of the program, competing at the National Golden Gloves Tournament of Champions in Salt Lake City last  month. END_OF_DOCUMENT_TOKEN_TO_BE_REPLACED

While researching my second book, Young & Wicked, I spent many hours ferreting out and reading 19th century newspaper stories related to one of the central characters, Willie Flannelly, Jersey City bad boy and my great-grandmother’s second cousin. Among the various true stories of his juvenile delinquency and anti-social behavior was one recounting his use of a slungshot (different from a slingshot) which was used to knock out a popular local featherweight boxer named Cal McCarthy. Slungshots, a maritime tool consisting of a weight attached to a heavy cord, were a favorite concealed weapon of thugs in those days. Ah, the misguided ingenuity of the criminal mind.

Callahan J. McCarthy was born in Pennsylvania in 1867 and came to the Horseshoe section of Jersey City with his Irish immigrant parents about five years later. One of six children, he made his first public appearance as an amateur boxer in 1887 in association with the Scottish-American Club of Jersey City. A bare knuckles fighter and all of 5’ 2” and 100 pounds, he won the American amateur 110-pound championship that year and turned pro in early 1888. McCarthy, called the “Wonder,” had a great left jab and quick cat-like movements. He went on to fight more than 40 bouts in various venues around the country, taking on both American and European opponents and won the Featherweight Championship of America. In 1890 in Boston, he took on George Dixon in a bout that went on for 70 rounds until a draw was declared. In their second meeting in 1891, Dixon beat McCarthy in 22 rounds. Following that defeat, McCarthy reportedly turned to drinking, soon losing his form and discipline but still fighting sporadically. The young boxer never regained his stride, was stricken with tuberculosis and, still planning a boxing comeback, died in 1895 at 28 years old. Despite that, he was remembered by fight fans and sports writers who, two decades later, still reminisced about McCarthy when talking about the latest crop of young featherweight and bantam boxers.  END_OF_DOCUMENT_TOKEN_TO_BE_REPLACED

At 72, Chuck Wepner of Bayonne stands 6’5”, weighs 250 lbs, has biceps like ropes of steel, and looks like he can still go a few rounds in the ring – even though it’s been 36 years since his match with Muhammad Ali for the World Heavyweight title.

In 1975, Wepner boxed 15 rounds with Ali and lost with a broken nose, cuts over his eyes and a bruised ego. But what the Bayonne boxer didn’t know was that an unknown named Sylvester Stallone was watching the fight on his TV set and three days later would write “Rocky” based on underdog Wepner. The film became a major hit in 1976 winning three Academy Awards and earning Stallone fame and fortune. Yo! Let’s not forget the sequels, too.

On Tues, Oct 25 at 8 p.m., “The Real Rocky” a documentary about Wepner’s life as a championship boxer and the story behind his bout with Ali airs on ESPN. (It also airs Wed, Oct 26 at 11 p.m. and Sat, Nov. 26 at 7:30 a.m. on ESPN2.)  And a film based on Wepner’s amazing story is in pre-production and will star Liev Schreiber as Wepner.

The one-hour documentary is directed by Jeff Feuerzeig, an award-winning director whose feature film “The Devil and Daniel Johnston” won top documentary directing honors at the 2005 Sundance Film Festival.  On ESPN.go.com, Feuerzeig, who grew up in New Jersey, explained his inspiration for making the Wepner documentary.

“ I’ve been a Chuck Wepner fan ever since 1975, when I was 10 years old and my father took my brother and me to Sports Night at the Raritan High School gymnasium in Hazlet to see Chuck, aka ‘The Bayonne Bleeder,’ just months before he was set to go up against Muhammad Ali for the heavyweight title,” Feuerzeig told ESPN. “There were no figures who loomed larger in this 10 year-old’s imagination than Evel Knievel, Andre the Giant and, especially, Muhammad Ali – “The Greatest” – and here was a 6-foot-5 behemoth (Wepner) in a full-length fur coat…and ridiculous amount of jewelry leading us in a chant of ‘Who’s gonna beat Ali? WEPNER!’ And in that instant, Chuck Wepner became a real-life mythological figure — as real to me as the Jersey Devil that haunted the local Pine Barrens.” END_OF_DOCUMENT_TOKEN_TO_BE_REPLACED 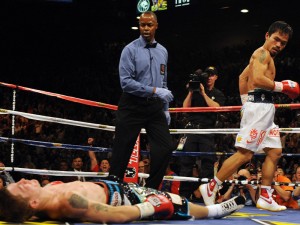 After the first minute of the recent Ricky Hatton-Manny Pacquiao tiff, it only became of matter of when ‘Pac Man’ would starch the Britisher, not IF he would. While the pre-fight odds favored Pacquiao (bettors rooting for the favorite had to lay $250 to win $100), and many fight game cognoscenti figured the Fightin’ Filipino to eventually lay waste to the pallid U.K’er, absolutely no one was prepared for the brutal and sudden demolition of the heretofore resilient Hatton.