Inside photos by David Bayne

Award-winning actor Danny Aiello is the House Special — the “cherry on the Spumoni”– at Tutta Pasta Italian restaurant in Hoboken, where on any given day passers-by can catch a glimpse of Aiello holding court in the dining room, signing autographs for his fans and, in essence, spreading his special charm like finely seasoned olive oil on a hunk of crusty Italian bread. 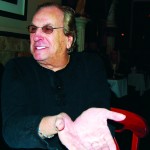 Cool in his wire-rimmed shades and hipper than most dudes his generation, the 76 year-old Aiello wants to leave ’em laughin’ in Hoboken – the town he “adopted” a few years back. So, more than two years ago, Tutta Pasta gave Aiello his own comedy venue, the second floor dining room where every Thursday night, he hosts “Danny’s Upstairs,” a comedy club for up-and-coming comics to do their thing.

“I love comedians,” Aiello says, on a recent Thursday night before show time. “I know what a difficult field (stand-up) is and I have connections. I can help the comics who perform here. That means something to me.”

Aiello loves to laugh, he says, and with 85 movies under his belt – including an Academy Award nomination for his role as Sal, the pizzeria owner in Spike Lee’s Do The Right Thing,  — Aiello has cultivated connections and wants to use those connections to help others move up the show biz ladder. That’s why you’ll find Aiello sitting in the restaurant he grooves on, in the town he loves, watching, laughing and giving stand-up comics moral support and a place to shine in front of an audience.

Showtime is 8:30 and the club seats about 50. The stage is small, with a mic and some spotlights lighting up the “Danny’s Upstairs” logo on the back wall. Waiters serve food and drinks and the place has the same look as other comedy clubs like the old Improv on 9th and 44th in Manhattan that closed a few years back (it’s a Chipotle eatery now.) It was in the early 1970s at the Improv, that Aiello entered the world of stand-up comedy – as a bouncer. While he watched the door, he also kept an eye on up-and-coming comics like David Brenner, Freddy Prinze, Rodney Dangerfield and Andy Kaufman. He observed their performances and the way they honed their jokes, dueled with hecklers and polished their acts to become headliners – which they all did.

From the Improv, Aiello hooked up with writer Louis Larusso, a Hoboken native who cast Aiello in several plays on Broadway including a production of Lamppost Reunion, a piece about Hoboken that Aiello says put him on the map. Aiello and Larusso became friends and ever since then, Hoboken cast its spell on Aiello and he fell in love with the town when it still had the look and feel of Budd Shulberg’s On the Waterfront, with its working class neighborhoods and old time charm.

Already a family man in 1977, (he has four children including Danny Aiello III who works as a professional stuntman, ) Aiello landed one of the lead roles in the Broadway hit Gemini, playing a warm-hearted dad who tries to help his son move beyond his working-class roots to finish Harvard.  Aiello brought pathos to the comedic role, something that he reveals time and again in the parts he plays. Whether it’s the gangster with a sympathetic heart in Woody Allen’s Radio Days, or the mama’s boy who lost Cher to Nicholas Cage in Moonstruck, Aiello gives his characters the heart of the working-class everyman who just wants to do the right thing – characters that are so old school, you can almost smell the Old Spice wafting from their shirt collars.

And now, Aiello shares that paternal instinct with the comics who perform on his stage every Thursday night.

At a recent show, six comics performed – five guys and a gal in their 20, 30s and 40s — who told jokes about skydiving, being fat, their girlfriends – or lack of them – and shopping at Wal-Mart.  Some of them had TV credits like appearances on 30 Rock and many of them are doing the club circuit, traveling to other cities for one-night stands in rooms like “Danny’s.”

Willy Sacco, a nervous comic who jumped about the stage like a high-kicking Rip Taylor told this joke during his routine: “I love this stage. It’s the same size as my apartment.” And this one: “I was so broke I had to move back to my parents. They live in a nursing home.” He also did some shtick as John Travolta making meatballs and dancing ala Saturday Night Fever.

Headliner for the evening, Mike Vecchione had a laid-back, low-key delivery and told jokes about his girlfriend, including this one: “Our fights are like an Iranian election. She always declares herself the winner.”

Vecchione then told a joke about ADD (Attention Deficit Disorder,) prompting a group of women at one of the tables to heckle and boo. Vecchione kept his cool and the ladies in check, keeping things light and breezy with a little flirtation. “I know what it is.  I feel the heat coming from this direction,” he said, talking directly at the giggling women. “I feel an attraction.”

All the comics kept the audience laughing throughout the 2-1/2 hour show and while they may not be big names like Artie Lange, Jackie Mason and Jerry Stiller who have performed at Danny’s, the comics are gaining experience and the opportunity to do their own material in a professional venue that takes them one step closer to their big break.

“When I worked at the Improv, I watched David Brenner perform and after he went on, he would go over what worked and what didn’t,” Aiello says. “I try to stress to the comics that when you bomb, it teaches you to be better.”

It’s that kind of enthusiasm and sage advice that makes Aiello hip and relevant. His zest for life is contagious and he continues to undertake projects that challenge and excite him and give him immense pleasure.  Aside from hosting his own comedy club and rehearsing a one-man show about Al Capone, Aiello just cut an album of songs, Live from Atlantic City, and his renditions of “Save the Last Dance,” and “Besame Mucho,” are now available at iTunes.

To his friends and fans, Aiello’s the Solid Gold Caddy of character actors who just keeps getting better with time. But take a closer look under the hood and you’re likely to find a guy with a big Italian heart, who acknowledges his lucky breaks and wants to share that luck with younger generations. Aiello was raised in New York, but he’s got a Jersey way about him, a stand-up guy with the heart of a working-class everyman who just wants to do the right thing.

You can almost smell the Old Spice wafting from his shirt collar.