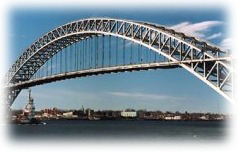 Bayonne’s Mayor Jimmy Davis announced that the Port Authority of New York and New Jersey has provided the City of Bayonne with updated information on the Bayonne Bridge construction project. END_OF_DOCUMENT_TOKEN_TO_BE_REPLACED

Reality TV star Drita D’Avanzo of Mob Wives VH1 sometimes talks like a thug on camera but when it comes to cosmetics she’s a a girlie-girl.

On Thursday, August 2nd,  D’Avanzo greeted fans and took to the stage at the Staten Island Mall to unveil her new line of make-up, “Just Me.” A former fashion model, D’Avanzo isn’t just lending her celebrity to sell lipstick to the masses. She actually went to school to study skincare and make-up and starting her own cosmetics line has been a dream ever since she was a tomboy growing up in the Projects. For those of you unfamiliar with Mob Wives (VH1, Sunday nights at 8) the show’s title tells all. D’Avanzo and her co-stars married men who aren’t 9-to-5ers, but rather, wiseguys with connections to crime families. For D’Avanzo, she was still a newlywed when police arrested her husband, Lee, and sent him to prison for five years. Like other women who have had to pick up the pieces after a life-changing event, D’Avanzo went to school to study cosmetology. When a friend suggested the idea for a Reality TV show, D’Avanzo signed on.

At the Staten Island Mall, customers lined up to buy lipsticks and lip plumpers and with just an hour to go before premiering her products, D’Avanzo took a few minutes to talk with the Riverview Observer about her new life as a Reality TV star and cosmetics designer.

RVO: Hi Drita, can you share with our readers how “Just Me” came about?

DD: I used to model and watch how the make-up artists did my makeup and I was amazed at how they made me look. When Lee went to jail, I took a job in a high-end department store. I worked all the counters. I loved selling and dealing with everyone’s makeup. I knew I wanted to make high-end products affordable.

RVO: What makes your cosmetics different or better?

DD: I am big on scent and I hate sticky. What makes it different? A lot of cosmetics are created by professional make-up artists. Nobody was behind the counter like I was. For seven years, I listened to a lot of women and what they wanted. All these things give me a lot of leverage.

RVO: Will you be working your new cosmetics into the show?

END_OF_DOCUMENT_TOKEN_TO_BE_REPLACED

Founder of the Enrico Caruso Museum of America

Played on the cutting-edge technology of his day

Staten Island, New York, May 24, 2011 – Casa Belvedere, The Italian Cultural Foundation is pleased to announce that Cavaliere Ufficiale Aldo Mancusi, founder of the Enrico Caruso Museum of America will present “The Life & Times of Enrico Caruso” on Wednesday, June 1 at 7:00 PM. END_OF_DOCUMENT_TOKEN_TO_BE_REPLACED

Here is a restaurant  list I will be updating every month by adding new restaurants in our  River View Observer Print publication and here at riverviewobserver.com

Try one of these fine restuarants for a delicious night out.- Enjoy Herb