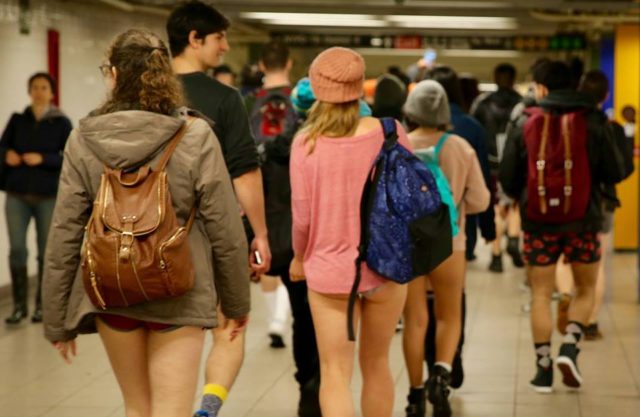 16th Annual No Pants Subway Ride is back and will take place on Sunday, January 8th this year. If you never heard of this event it  is an annual event staged by Improv Everywhere every January in New York City.

Started many years ago as a small prank with seven guys has  grown into an international celebration of silliness, with dozens of cities around the world participating each year.

The idea behind No Pants is simple: Random passengers board a subway car at separate stops in the middle of winter without pants. The participants behave as if they do not know each other, and they all wear winter coats, hats, scarves, and gloves. The only unusual thing is their lack of pants.

The 16th Annual No Pants Subway Ride will take place on January 8 in New York York City. Full participation details including meeting point locations can be found below:

https://improveverywhere.com/2017/01/03/no-pants-subway-ride-2017-details-for-new-york/ Join our email list to stay updated about this and future participatory events in NYC: http://improveverywhere.com/email-lists/ After the ride, come to the official after party at Bar 13! Details & RSVP here: https://ypl.io/nopantsafterparty

Have you ever gone to this event?

Would you go now that you know about it?