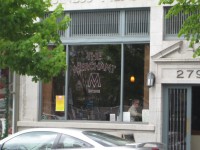 Since June 2002, The Merchant bar and restaurant on Grove Street has been the unofficial watering hole for city workers who come in to relax after a hard day at City Hall. In fact, it’s not unusual to see the mayor sit down in the back with members of his staff. Just last week, Jersey City’s newly-elected Mayor Steve Fulop celebrated his election at The Merchant.

Owners Dave O’Brien and his sister Anne-Marie share the responsibilities of running the neighborhood pub which features a beautiful bar and two large, red-bricked rooms for dining. They serve an American menu with regional twists, says O’Brien who also is Executive Chef. The brother and sister team hail originally from Ireland and although the menu is considered American, there’s a nod here and there to their Irish roots.

On a busy Friday, Dave O’Brien took time out of his busy schedule to share with Riverview Observer’s readers his “Ten Ingredients” for The Merchant’s success.