La Isla Restaurant on Washington Street up the block from City Hall has been a Hoboken staple, serving Cuban cuisine in a tiny space where you have to step outside to change your mind. Riding on the success of its downtown location, La Isla Uptown located on 12th Street and Maxwell Place takes Cuban cuisine to a whole new level in an atmosphere that’s open, aery and filled with Cuban hospitality. 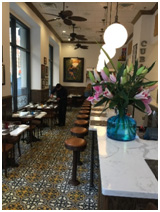 At La Isla Uptown, its more of a fine-dining experience compared to the luncheonette feeling of La Isla downtown, says wine director and general manager Andres Montoya. The uptown restaurant is huge and open with seating for one-hundred in the dining room, at the bar, and in the front of the restaurant that features a counter and stools for those who want to dine and dash. The floor-to-ceiling glass walls, marble floor tiles, and the ceiling fans in dark brown wood make a visitor feel as if they stepped inside a Havana bistro. Along with the beautiful décor, La Isla Uptown has a liquor license which means great wine, beer and Mojitos, Montoya says. END_OF_DOCUMENT_TOKEN_TO_BE_REPLACED 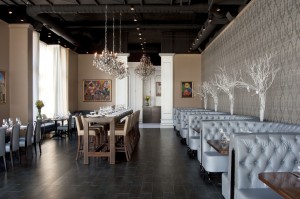 A deal two years in the making, Son Cubano restaurant is now opened at The Shops at Riverwalk in West New York. This family-owned business brings the authenticity of Cuban cuisine to their hometown after successful restaurant ventures in NYC. .
For months, The Shops at Riverwalk has been abuzz with new and exciting additions, one being the highly anticipated opening of Son Cubano.

With its sister restaurants Son Cubano in the Meat Packing District and Flor de Sol in Tribeca reaping the benefits of needing a Cuban fix in the city, it was no wonder the Duran-Gouchee family wanted to bring their success back home to West New York.

END_OF_DOCUMENT_TOKEN_TO_BE_REPLACED

Smashing Opening for Son Cubano at The Shops at Riverwalk

Son Cubano restaurant celebrated its opening at The Shops at Riverwalk in West New York and promises more exciting events to come, including a New Year’s Eve celebration.

Bergen/Hudson County, NJ, 22 December 2010 – After months of anticipation, the highly awaited opening of Son Cubano at The Shops at Riverwalk was a smashing success this past week.  The Duran-Gouchee family was able to bring the sweet sounds and flavors of the Caribbean to its latest restaurant venture in West New York. END_OF_DOCUMENT_TOKEN_TO_BE_REPLACED