East Rutherford,  New Jersey,  January 31,  2014. …..Catch a Rising Star at the brand newly- renovated  Victory Sports Bar and Club at the Meadowlands Racetrack on February 14, 2014 at 9 pm – the first major comedy presentation ever at this venue, with many more to come.  Join the world famous Gilbert Gottfried as he shares his exceptional brand of humor with a new audience.

Catch CEO Suzy Yengo says “this is the Perfect spot for Valentines – an exquisite Aphrodisiac Inspired Menu with complimentary champagne, and a comic men simply adore.  Something for every couple!” END_OF_DOCUMENT_TOKEN_TO_BE_REPLACED 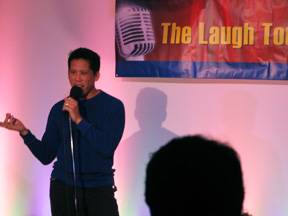 It’s April and maybe you could use a few good laughs to cheer up those IRS blues. Then why not head over to Art House Productions in Jersey City on Sat, April 27 for a night of stand-up comedy featuring Mike Britt. Host Rich Kiamco, who runs the comedy nights at Art House Productions, promises it will be an evening of topical comedy not “Photoshop commentary”.

“The show is great,” Kiamco says. “This is almost our third year at Art House. The show has a following; it’s a good time. There’s always a headliner from ‘The Tonight Show’ or Comedy Central.”

Living in Hudson offers plenty of resources to inspire laughs, Kiamco says, especially when the comedy is based on natural disasters.

“We had two disaster shows, one right after Hurricane Sandy and one after the blizzard,” Kiamco says, “The place was packed.” END_OF_DOCUMENT_TOKEN_TO_BE_REPLACED