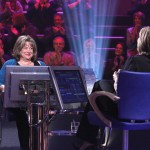 Barbara Eden from Jersey City; the Realtor, not the Actress appeared on “Who Wants To Be A Millionaire’s ” special Edition of “Famous Names Week”

Barbara’s $50,000 question was: Category, ‘What a Bargain!’ – “Which of these U.S. states was not formed at least in part from land bought during the Louisiana Purchase? A: Minnesota , B: Arkansas , C: Colorado , D: Illinois.” Barbara guessed the answer to be “C,” but unfortunately, the correct answer was “D.” Barbara walked away with $25,000 in winnings.

* PROGRAMMING NOTE …… Samantha Harris, co-host of ABC’s Dancing With The Stars and correspondent on The Insider… END_OF_DOCUMENT_TOKEN_TO_BE_REPLACED