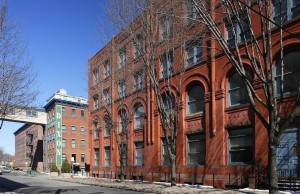 Historic Condominium Conversion to be Honored During May 27 CeremonyJERSEY CITY, N. J. (May 18, 2010) — The Jersey City Landmarks Conservancy, a not-for-profit organization that works to preserve, promote and protect the city’s irreplaceable historic resources, has announced that it has selected The Residences at Dixon Mills, a landmark condominium conversion in downtown Jersey City, to receive an Excellence in Preservation award at the Conservancy’s 2010 Annual Preservation Awards Ceremony.

Given to outstanding examples of restoration or adaptive reuse of a historic building, the Excellence in Preservation award is being bestowed upon The Residences at Dixon Mills for Elmsford, NY-based developer Robert Martin Company’s restoration of the former Dixon Ticonderoga furnace houses into luxury condominiums and a comprehensive lifestyle amenities facility.

“More than 150 years ago, entrepreneur Joseph Dixon moved his growing business to downtown Jersey City, where he manufactured several products, the most famous of which is the yellow Dixon Ticonderoga pencil. Today, with their original architectural details, period brickwork and wrought-iron railings restored, those same Romanesque Revival-style buildings continue to be a fixture of downtown Jersey City,” stated Tim Jones, principal of Robert Martin Company. “We are extremely honored to receive this award from the Jersey City Landmarks Conservancy, and to be acknowledged for the work we have done in breathing new life into this important Landmark of New Jersey’s industrial past.”

The Conservancy will hold its ceremony from 6 to 9 p.m. on Thursday, May 27 at the Landmark Loews Theater at 54 Journal Square in Jersey City. Tours of the theatre will be provided following the awards ceremony.

The five buildings that comprise Dixon Mills were converted from a factory into rental apartments in the 1980’s. Robert Martin Company subsequently purchased the property in 2007 and developed the community into 467 luxury condominiums and a lifestyle center converted from the development’s historic Powerhouse building.

“The unique historic charm of this community is one of the primary reasons we have been so successful in our sales efforts, having sold and closed more residences over the past year than any other condominium community in Jersey City,” stated Jones.

Surrounded by cobblestone-style streets and landscaped courtyards adorned with rows of turn-of-the-century streetlamps and flowerboxes, The Residences at Dixon Mills combines bygone-era charm with a sense of urban sophistication.

The community is located just three blocks from the nearby Grove Street PATH station, offering direct access to Wall Street or Midtown, as well as the neighborhood’s many retailers, restaurants and cultural and entertainment venues. As part of the community’s amenities package, Dixon Mills offers residents a shuttle bus that takes them from their door to the PATH station.

Studios, as well as one-, two- and three-bedroom condominium residences are available from the low $200,000s. Duplexes and triplexes are also available, as are over 100 penthouses. Many of the residences feature oversized windows and ceilings that range in height from nine feet to 12 feet.

For more information about The Residences at Dixon Mills, please call the Sales Office at 201-309-1004 or visit www.dixonmillsjc.com.

About Robert Martin Company
Founded in 1957, Robert Martin Co. has a long, distinguished history in real estate. The company and its partners have developed and acquired over 20 million square feet of property and its holdings presently include over two million square feet of office space and hundreds of acres of developable land. Widely regarded as a pioneer in office park development and mixed-use urban renewal projects, the real estate and investment firm has expanded from its home base in the New York metropolitan region into California and Florida, where it has recently partnered to buy over 600 hundred acres of land, approximately 2,500 apartments and a large mixed-use project in Miami, Florida. For more information on Robert Martin Co. visit www.robertmartincompany.com