Known as the little town across from New York City, Weehawken has a story all its own.  Just in time for the community’s 150th anniversary, Weehawken Historical Commission members Lauren Sherman and Ellen Robb Gaulkin present the local history using more than 200 vintage images in the new book, Weehawken.

The majority of the images in Weehawken are from the Historical Commission’s collection and from a few residents with large personal collections. A number of individuals lent or donated a smaller trove of treasured postcards and old photos previously unknown to the Commission for the book.

One of the Photo’s we at the River View Observer found interesting was Edward Hopper’s painting East Wind Over Weehawken, 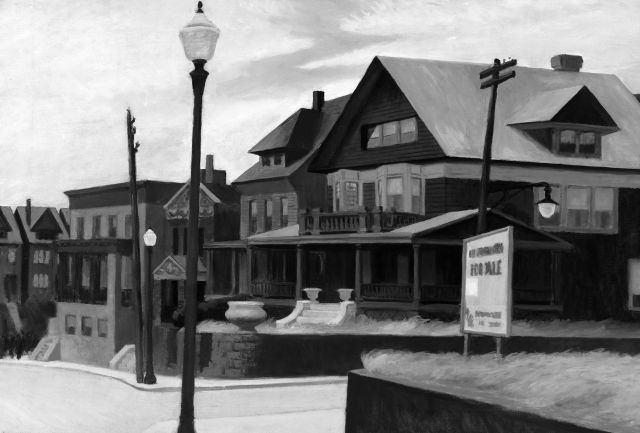 depicting the corner of Forty-ninth Street and Boulevard East, was painted in 1934 after a series of eight sketches he did of the site. Hopper found inspiration in the urban scenes of the city and occasionally ventured across the river to Hoboken and Weehawken. The corner does not look much different today; the concrete urn still sits at the corner retaining wall directly across from the American Legion lot. (Pennsylvania Academy of the Fine Arts, Philadelphia, Collections Fund.)

Also available is a set of 15 postcards featuring a selection of vintage images from Weehawken.  The set retails for $7.99.

The authors hope both products “will instill a further sense of pride in Weehawken residents and let other readers know that Weehawken’s history is much more than just the site of the Hamilton Burr duel and the entrance to the Lincoln tunnel.”

Highlights of Weehawken:
• The Eldorado Amusement Park from 1891 until 1894, which has fascinated long-time and new residents alike
• Photographs of areas that were completely transformed by the advent of the Lincoln Tunnel
• Early bucolic estates, the idyllic attractions of the magnificent Palisades, and its notorious hidden dueling grounds
• The iconic 1883 Weehawken water tower

Profits from book sales will be donated to the Weehawken Historical Commission.

Available at area bookstores, independent retailers, and online retailers, or through Arcadia Publishing at (888)-313-2665 or http://arcadiapublishing.com.

Arcadia Publishing is the leading publisher of local and regional history in the United States.  Our mission is to make history accessible and meaningful through the publication of books on the heritage of America’s people and places.  Have we done a book on your town?  Visit http://arcadiapublishing.com..
###