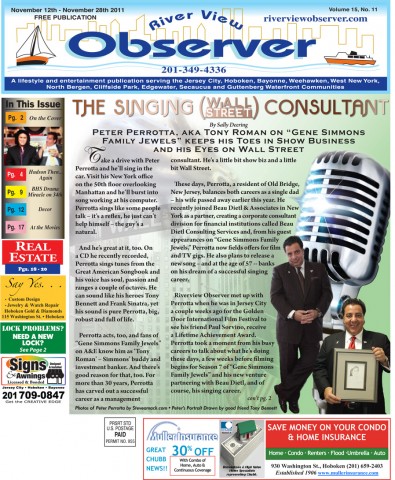 Peter Perrotta, AKA Tony Roman on “Gene Simmons “Family Jewels” Keeps His Toes in Show Business and His Eyes on Wall Street

Take a drive with Peter Perrotta and he’ll sing in the car. Visit his New York office on the 50th floor overlooking Manhattan and he’ll burst into song working at his computer. Perrotta sings like some people talk – it’s a reflex, he just  can’t help himself – the guy’s a natural.

And he’s great at it, too. On a CD he recently recorded, Perrotta sings tunes from the Great American Songbook and his voice has soul, passion and ranges a couple of octaves. He can sound like his heroes Tony Bennett and Frank Sinatra, yet  his sound is pure Perrotta, big, robust and full of life.

Perrotta acts, too, and fans of “Gene Simmons Family Jewels” on A&E know him as ‘Tony Roman’ – Simmons’ buddy and investment banker. And there’s good reason for that,too. For more than 30 years, Perrotta has carved out a successful career as a management consultant. He’s a little bit show biz and a little bit Wall Street.

These days, Perrotta, a resident of Old Bridge, New Jersey, balances both careers as a single dad – his wife passed away earlier this year. He recently joined Beau Dietl & Associates in New York as a partner, creating a corporate
consultant division for financial institutions called Beau Dietl Consulting Services and, from his guest appearances on “Gene Simmons Family Jewels,” Perrotta now fields offers for film and TV gigs. He also plans to release a new song –
and at the age of 57 — banks on his dream of a successful singing career.

Riverview Observer met up with Perrotta when he was in Jersey City a couple weeks ago for the Golden Door
International Film Festival to see his friend Paul Sorvino, receive a Lifetime Achievement Award.  Perrotta took a moment from his busy careers to talk about what he’s doing these days, a few weeks before filming begins for Season 7 of “Gene Simmons Family Jewels” and his new venture partnering with Beau Dietl, and of course, his singing career.

RO: Are you a Jersey guy?

PP: I’m a Brooklyn guy born in Park Slope. I wouldn’t trade my Brooklyn upbringing for all the money in the world.
I never really had a formal education. I had to drop out of college to support a family at a young age. I was 23.

RO: When did you know you could sing?

PP: I’ve been singing since I was seven years-old. All I ever wanted to do was sing and act. It’s a God-given talent; I
never took a lesson. My Uncle Richard Pascone aka Ricky Lynn was a cabaret singer at the Copacabana, and as a kid I used to watch him rehearse. As a matter of fact, in high school I was discovered by Anna Strasberg (wife of Lee
Strasberg) in “Camelot.” I played Sir Lancelot. I studied at the Actor’s Studio following in the footsteps of Al Pacino and Ben Gazzara. I could do it all sing, dance, act. I did 150 weddings a year. They named me ‘The King of the
Screamers.’ If a band double-booked, they would call me in because the bride would be screaming ‘Where’s my bandleader?’ I’d ask, ‘What’s your wedding song?” I can do Elvis, Tom Jones, Tony Bennett, Johnny Mathis. In 30 seconds the bride was cooled out.

RO: How did your singing career begin?

PP: Peter Buonconsiglio, who was Frank Sinatra’s lead violinist heard me sing at an affair and was
floored. He immediately started to book me on gigs and I was booked at Sybil’s. Every celeb in the world like Liza Minnelli, John Travolta, Sly Stallone and even “Chicken King” Frank Perdue came to see me sing.

RO: Did you ever meet Tony Bennett?

PP: I know Tony for a long time. I sang with Tony Bennett at the Bob Hope Theater. I have a sketch of Tony Bennett
sketching me from 1989. I pitched A&E with an idea for a TV show called ‘Carrying the Torch.” the search for the next great American crooner — the guy who sings in saloons, basements, driving a truck – and it would culminate with
a concert with Tony Bennett and a recording contract. The decision was Danny Bennett’s, Tony’s son.  No one ever got
back to me.

RO: Why did you go into the corporate scene?

PP: In 1982, I was the “Fireman of Wall Street.” Whenever there was a major problem, someone was out of balance I would come in and fix it. I was a fixer. I went into the temporary employee business and I sang for all the big top Wall
Street executives. By singing and knowing all these guys, it was natural for me to go into this business. You take a gamble to be a famous singer. There are a million great singers. In order to be making the kind of money I was making, I would have to be a Tony Bennett or Frank Sinatra. So, I had to decide, ‘Do I take $200,000 guaranteed with a future?’ I became an unbelievable success as a Wall Street executive, gave up my singing and acting career and never looked back. But I always regret it. I think I was cut from the same cloth as Frank Sinatra and Tom Jones.

RO: How did you land a recurring role on “Gene Simmons Family Jewels?”

PP: Leslie Greif, an executive producer of ‘Gene Simmons Family Jewels’ is a childhood friend of mine and invited me to be on the show for Gene’s 55th birthday episode. Gene started talking about an investment he wanted to make and I fought him tooth and nail and he thought the chemistry was right and we became friends. That’s the essence of me and him for seven years. I’m his sidekick.

RO: Can you describe the work you do for Beau Dietl & Associates?

PP: I joined Beau Dietl & Associates this year. We’re a niche consulting provider and we provide professional consultant support for all sorts of things. There are two parts of the business. On Beau Dietl’s side he does private investigating work. On the Beau Dietl consulting side, we place people in IT, finance, anti-money laundering, compliance and vertical strategic sourcing and we do that for many large clients. We go into a bank and show them where all their vulnerability is and we fix it. (www.investigations.com)

RO: And you haven’t given up your dream of a singing/acting career?

PP: It’s not over yet. Once I get this business where I want it to be – I just I started this year with Beau – I want
to do what I do. Maybe singing, maybe acting, I’m going to record ‘All at Once it’s Spring’ written by Neville Grusd. I’m not ruling out a show biz career. People are coming at me like you can’t believe. I’m a little long in the tooth,
but I think I would be unfulfilled in life if I didn’t show what I can do.