College Students Wanted to Compete for the Title of “New Jersey King or Queen of Campus Comedy.” 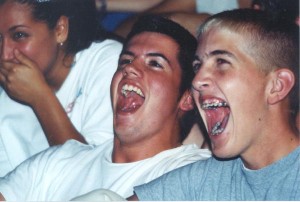 The third annual New Jersey Comedy Festival will be held at college campuses throughout the state starting this fall.  During this fun-filled event, the most comical college students from many New Jersey colleges and universities will compete for the title of “New Jersey King or Queen of Campus Comedy.”

Registered contestants participate in a preliminary event at their own school or a local host college. The comedians are judged based upon originality, stage presence, material and audience reaction. The season-long competition concludes at the Championship Finals on Saturday, January 30, 2010 in the Rutgers Student Center on Rutgers University’s College Avenue Campus in New Brunswick. Prizes will include the Good Humor Award, a scholarship from the Manhattan Comedy School, the opportunity to perform at The Stress Factory Comedy Club in New Brunswick and a $1,000 cash prize.

Last year, students from 40 New Jersey colleges performed their stand-up routines and 27 finalists were chosen to compete in the Finals. The 2009 winner, Kevin “Vegas” Lancaster from The College of New Jersey, received a scholarship to a renowned comedy school, the opportunity to perform an opening act at one of New York’s leading comedy clubs, and a cash grand prize.

According to Dennis Hedlund, founder and executive producer of the New Jersey Comedy Festival, “We encourage students from every college in the state to get involved with the 2009-2010 Comedy Festival.   New Jersey has an amazing number of talented young comedians and we are looking forward to another successful season.”

For information on sponsorships, a complete schedule and list of colleges competing visit www.newjerseycomedyfestival.com or call Dennis Hedlund, executive producer of the Festival at 732-728-0111.