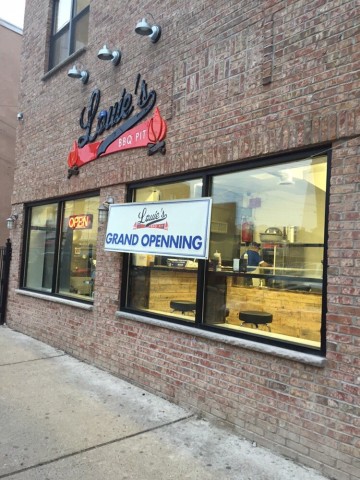 Louie’s BBQ Pit serves yummy sides, too, like Tamales and Chicken Croquettes; and you can order Brisket by the pound.

The urban eatery features a counter and stools for those who want to eat-in. Upstairs, Morilla marinades, rubs, seasons, and smokes the meats he serves in oak wood. It’s also where he keeps a book of secret recipes, mainly the seasonings he uses for his rubs and marinades. Morilla brines chicken, and marinades brisket and pulled pork from 18-22 hours before barbecuing.

“I like to please people,” Morilla says, taking a much-needed break outside his eatery. “I enjoy cooking and I cook good smoked barbecue.”

Born in Cuba, Luis Morilla came to the U.S. when he was 17. His family settled in West New York where Morilla graduated from Memorial High School. He went on to Kean College for two years and from there went into business selling clothes in New York and then Union City. Years later, he turned to cooking.

After only five weeks, Louie’s BBQ Pit already has signature dishes like the Pulled Pork that are turning one-time customers into regulars. One customer stopped in recently for Morilla’s barbecue who was doing business in New York and hails from Louisville, Kentucky.

Mainly a takeout spot, Louie’s BBQ Pit delivers to West New York and town beyond like North Bergen, Guttenberg, Weehawken, and Union City. Morilla hopes to get the word out to residents on the waterfront, and plans to start delivering to Hoboken, too.

“I always liked barbecue and my son Louie liked barbecue,” Morilla says. “It was something we enjoyed together like baseball, hunting, and fishing.”

If you look closely at Louie’s BBQ Pit logo, you’ll see a blue baseball cap with the No. 22 on top of the “o” in Louie. It stands for Morilla’s son Louis Morilla and the cap he wore as a catcher for the Los Angeles Dodgers. In 2010, Louis Morilla lost his life from a gunshot wound during an altercation in Passaic. Five years later, Luis opened Louie’s BBQ Pit, naming the eatery after his son.

On the baseball field, Louis Morilla’s position was Catcher, but he was also a great hitter, his dad says. Luis Morilla remembers when a Major League Baseball scout was coming to see his son play and the young Louie said to his dad: “All I want is for them to pitch to me; I’ll take it from there,” Luis recalls.

“That’s how I feel about Louie’s BBQ,” Morilla says. “All I want is for people to try the food, just once, and I’m sure they’ll come back a second time.”