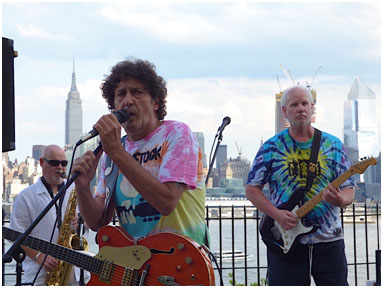 On a recent Sunday afternoon, Hamilton Park on Boulevard East in Weehawken, with its breathtaking view of the New York Skyline, transformed from pastoral park to electric guitar-riffing rock concert with residents and visitors chilling on its great lawn.

The group rocking the crowd was Finish This, a local old school garage band that dates back to the 1970s when bandmates Joey Cimino, Billy Valentine, Mike Culhane, Mike Montanaro, John Forsdahl, Mike Waddle, and lead guitar Matt Gale’s dad were high school buddies in West New York. At Hamilton Park, the band, which knows more than 300 songs from all their years of gigging, performed a two-hour set of iconic 60s tunes like Wooly Bully and In the Midnight Hour.

“The audience was great,” Cimino says after the show. “Whenever you see an audience from 2 –to-80 having a good time, you know its going great. That’s why we were the opening show. They wanted to get a good crowd – and they did.”

Finish This’ performance officially kicked-off the Hamilton Park 2017 Free Summer Concert Series happening every Sunday from 5-7 pm through Labor Day Weekend. After a break for July 4th, the series kicks off again on Sunday, July 9 with Swingadelic, followed by Big Mamou on July 16, Boulevard East Collective on July 23 and the Joe Ruddick Quartet on July 30. In August, it’s the Annie Minogue Band with opening act Violet on Aug. 6, Donna Coney Island and South Street Station on Aug. 13, Anthony Bez on Aug. 20, The Joni Project on Aug. 27 and Zaccai Curtis on Sept. 3.

The series, sponsored by Weehawken Mayor Richard F. Turner and the Town Council also runs in tandem with the Pershing Park Free Summer Concert Series beginning Wednesday, July 5 with Flamenco Latino and running every other Wednesday night featuring Joe Cimino’s Rubber Room on July 19, Weehawken Jazz All Stars on Aug 2, Maxima Alerta on Aug 16, and the final show of the series, the Weehawken Singer/Songwriter Night on Aug 30. (Pershing Park is located at the foot of Pershing Road on Weehawken’s waterfront.)

Further down along the Hudson on Weehawken’s waterfront, the Hudson River Performing Arts Center (HRPAC) at Lincoln Harbor Park near the Chart House restaurant is also hosting its summer-long concert series – also on Wednesdays at 7 pm – and it features some hot acts like the Cumbia River Band, singer Alicia Olatuja, The Hillbenders presenting The Who’s TOMMY; and Pedro Cortes Flamenco Soul. 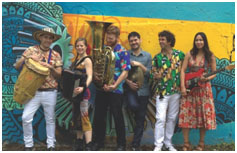 “For 14 years, Summer Concerts on the Hudson has presented world class artists in concerts that are free of charge to the public,” Bruce Sherman, HRPAC’s executive director says. “What could be better than listening to great music on a beautiful summer evening in a spectacular riverfront setting!”

“Community events like these bring people together,” Daly says. “It’s great music, and its all free.”

If you go
For more info, directions, and late breaking concert news and updates, check the HRPAC website hrpac.org or call the concert info line (201) 716-4540.