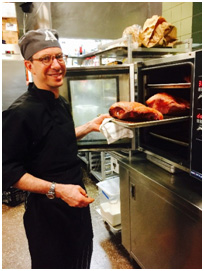 Chef Dan Latham grew up in Upstate New York and studied cooking at the Culinary Institute of America. He and his wife, Kris, a seasoned pastry chef are the proud owners of Latham House, a handsome restaurant on Marin Boulevard tucked inside the heart of Grove Street’s transportation hub in downtown Jersey City. Their partner is Mike Ryan, a busy and popular Jersey City restaurateur.

Latham House stands out with a beautiful atmosphere of dark woods, white walls, and a long row of gray-marbled tabletops for two that fill the center of the dining room. Beautiful roomy booths with green-tufted banquettes to lean back on come with super-sized windows offering nice views of downtown Jersey City. Off to the right near the kitchen, there’s a bar, and near the bar, there’s a Supper Bell that has an historic place in the Latham family scrapbook.

‘The bell came from my grandfather, it’s the supper bell,” Chef Dan says. “We ring it now and then. We have our own way of doing things.”

Chef Dan has been a Jersey City resident since the late 1980s and he and his wife, Kris, and their daughter live in The Heights. Kris is also the Latham House Pastry Chef and Hostess, running the front of the house, seating guests and making sure everyone’s happy.

“The key to being great is consistency,” Chef Dan says. “I want you to come here every time and say that’s amazing. Consistency is extremely important.”

Running a great restaurant is hard work and long hours, too. Before opening Latham House last July, Chef Dan spent 17 years as Chef for Cornelia Street Café in Greenwich Village. (That’s where he and Mike Ryan met and decided to partner up at Latham House.)

“I get here at 9 am and leave at midnight,” Chef Dan says. “Kris and I take Sunday night and Monday off. You need to be dedicated. We push ourselves and we listen to our clientele.”

Chef Dan serves American Cuisine, and the menu has influences from his upbringing on the East Coast and Kris’s West Coast background

Some of the signature dishes are the Cuban Reuben sandwich made with corned beef that’s been cooked for six hours and then smoked another six hours; and served with pickle, mayo/mustard, and spicy slaw on the side with French fries.

The Chicken Pot Pie and the Thai Bouillabaisse made with seafood in a curry coconut broth are also popular dishes that keep customers coming back.

“We use fresh ingredients; everything is local New Jersey,” Chef Dan says “We use local vendors who deal directly with the farms.”

And here’s the backstory on the Supper Bell: It states on the Latham House website: “Our bell is an original US Navy Ship’s Bell given to Grandpa ‘JC’ Latham for his many years of service. The bell had resided over 150 years in Upstate NY in a small town called Bath. The last 10 plus years, it was prominently displayed on our porch in The Heights of Jersey City. We now proudly hang “Bell” in our restaurant, Latham House. Welcome to Latham House.”

“Kris and I are a husband and wife team,” Chef Dan says.

They also rely on Alvin, the Sous Chef.

“He is fantastic,” Chef Dan says.