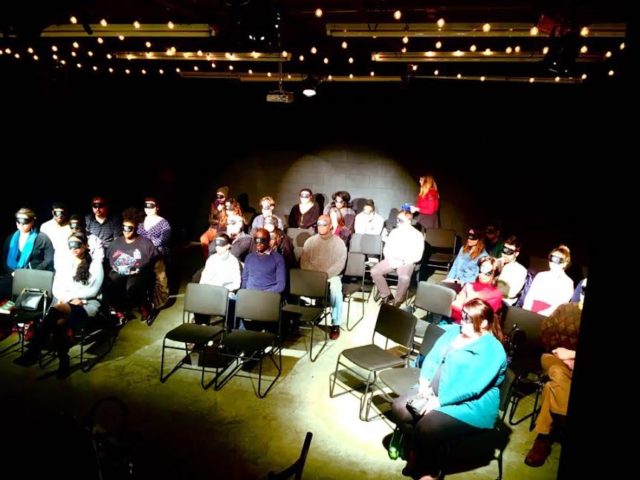 “They experience the play through taste, sound, touch and smell,” Levie says.

No Peeking’s latest venture into theater for the blindfolded debuted Thurs, Nov. 8, with the absurdist comedy, We Have Standards by Allie Kroeper, to be performed at the Kennedy Dancers studios on Beacon Street in the Jersey City Heights.  The show runs through Sun, Nov. 18, and tickets are $20 online; $25 at the door.

Levie, the company’s Artistic Director describes We Have Standards as an absurd satirical comedy. Allie Kroeper’s play tells the story of a woman who introduces her fiance to her parents, but there’s one caveat: her parents don’t like the name Steve, and the woman’s fiance’s name is Steve. The cast features Liliane Wolf, Bryan Murray, Dale Davidson, and Myles Wright.

“Allie does an amazing job at not only touching the issues that are relevant and important, but she cracks me up with her vessels for delivery,” Levie says. “I am so lucky to have this play written by such a hilarious playwright.”

No Peeking Theatre began in 2014 after a two-year development at Art House Productions in Jersey City. Since No Peeking’s debut, the company has performed at several venues; Kennedy Dancers’ studio will house the company’s 9th production. Since the audience will be blindfolded, they will experience the show in a more sensory and visceral way by using their other senses, Levie says.  This immersive show will have two touch exhibits and a Q & A after some shows.

“No Peeking came from an idea I developed at Kean University,” Levie says. “I wanted to create a form of theater that was accessible to everyone. If you are disabled, have low-vision or are blind, the way you experience theater is not like everybody else. Theater is not the same for someone who cannot see. Take away one of the senses, and we are experiencing theater evenly.”

Experiencing theater wearing a blindfold can be somewhat disorienting, but that’s okay.

“That’s totally fine,” Levie says. “The audience is safe. They’re not going to be assaulted. This is supposed to be a disorienting experience, but you’re not the only person blindfolded. It’s the entire room.”

Because No Peeking Theatre incorporates a “soundscape” and a “smellscape” some audience members may not like certain sounds or smells during the course of the play. Generally, though, people are immersed in the story, Levie says. Another highlight of No Peeking Theatre is that casting is based more on skills than looks, which gives the director leeway casting the show.

“This created a lot of opportunities,” Levie says. “For instance, casting people based on their acting abilities and their skill-set is more important than whether they look the part.”