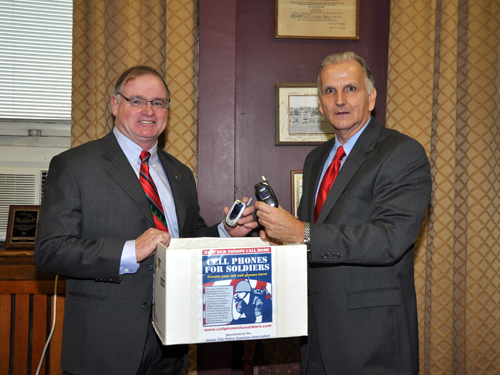 Photo caption:  Mayor Jerramiah T. Healy and Lt. Joe Delaney, Pres. of the PSOA, place cellphones into a box at the kick-off of Jersey City’s Cell Phone for Soldiers campaign.

The Jersey City Police Superior Officers Association will be participating in Cell Phones for Soldiers, a national cell phone drive for military personnel overseas.  All used cell phones will be collected at each of the citys four police districts in specially marked boxes from November 15, 2008 through January 15, 2009.

The phones are then sent to ReCellular, which pays Cell Phones for Soldiers for each donated phone — enough to provide an hour of talk time to soldiers abroad.  The goal of the Jersey City drive is to collect enough cell phones for more than 150 troops overseas, while nationally the non-profit hopes to obtain 12 million minutes of prepaid calling cards.

Cell Phones for Soldiers was founded by teenagers Robbie and Brittany Bergquist from Norwell, Mass., with $21 of their own money.  Since then, the registered 501C3 non-profit organization has raised almost $2 million in donations and distributed more than 500,000 prepaid calling cards to soldiers serving overseas.

The Jersey City Police Superior Officers Association and Cell Phones for Soldiers address an everyday emotional need that many have experienced: the imperative to phone home, to hear a familiar voice while far away.  Although overseas calls are expensive, to a military family, a phone call home is priceless.  Please help our troops by donating your used cell phones today.  For more information, go to www.cellphonesforsoldiers.com.