The Jersey Express Professional Basketball Team, is proud to call Jersey City home! The Express will be playing its home games at the National Guard Jersey City Armory, located at 678 Montgomery Street, for the upcoming American Basketball Association (ABA) Season. 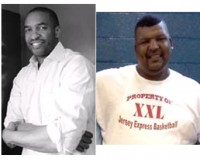 The Express comes to town with Jersey City written all over it! Jersey City’s own; Terry Dehere, former player for St. Anthony’s High School, Seton Hall University, and an NBA 1st round draft pick of the LA Clippers, takes over as Head Coach. Luther Wright, former Seton Hall star and 1st round draft pick of the Utah Jazz, acts as Big Man Coach. For those players looking to go overseas, or maybe even have aspirations on playing in the NBA, here’s an opportunity to play for those who have been…where you want to go! Player instruction and exposure will be at its highest.

“I’d like to thank Jersey City Mayor Jerramiah Healy for his support, and commitment to the success of the team,” said Jersey Express Owner, Marsha Blount. “We look forward to Mayor Healy opening the new season for us on opening night, and we look forward to continuing our involvement in the city, with several upcoming community events and back to school initiatives.”

Recently, Terry Dehere’s All Star Classic, featured the Express and our entertainment division by putting on a courtside music concert, to show the public that attending a Jersey Express game will also feature LIVE pre-game and half-time entertainment. With the NBA currently in the midst of a lockout, the ABA is stronger than ever, and New Jersey’s own Jersey Express will feature exciting, high-scoring, fun-filled family entertainment, at affordable prices. Enjoy a night out at an Express game, for less than the price of a movie ticket! Opening night is Saturday, November 19th @ 7pm.

SEASON TICKETS ARE ON SALE NOW!!! General Admission Season Tickets are ONLY $105 – VIP Floor Season Tickets (includes meal, and concierge service) are ONLY $525 for 15 regular season home games. Individual game tickets are ONLY $10, and you’re encouraged to bring a child for only $5. Season ticket holders will be invited to attend an opening night pre-game autograph session with the players and coaches.

Become one of the MIGHTY 100! WE’RE LOOING FOR LOCAL SMALL BUSINESSES, TO BECOME APART OF OUR COMMUNITY’S MIGHTY 100 LOGO SPONSORSHIP PROGRAM. Contact Jeff Brown for more information @ 732-904-4465, or e-mail: jbrown@jerseyexpress.net. We have Sponsorship Opportunities to fit ANY budget.