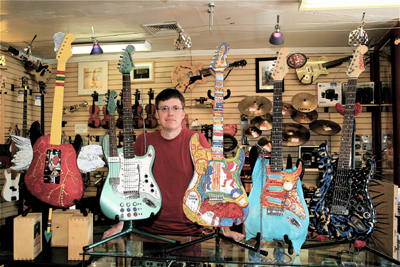 Dalzell is an accomplished violist and guitar builder, building guitars and playing music is a natural for this fine musician. One day while looking at a basic black and white guitar, Dalzell came up with an idea. Why not put together an exhibit that would feature 12 guitars all decorated in various styles and artistic expressions? Dalzel decided that he would donate the guitars to local artists and allow them to paint, sculpt, cut, glue and modify them in any way they wanted. He reached out to many local artists and explained his idea and concept. The idea was quickly embraced and what has transpired are 12 different guitars by 12 different artists. The results are as interesting and eclectic as the artists themselves.
Asked how he came up with the idea for this great exhibit Dalzell explained, “I have been building guitars since high school.” There is something interesting about making a variety of different styles and kinds of guitars. I thought it would be a great idea to have these basic black guitars, transformed into different disciplines.”
Dalzell is also one of the 12 artists who has taken the basic guitar and transformed it into a magnificent work of art. His creation which is entitled, “The Destroyer”, is a reflection of the 60’s. It’s designed is jade green with chrome and its formulation is of a 60’s automobile. It also features a form of musical instrument called the “Theremin.” Not only is this guitar beautifully designed it is also playable.
The guitars will be on display at Metropolis Music from September 31st until October 5th. On October 5th the show will be moved to The Canco Lofts at 50 Dey Street for the kick-off celebration. Then on October 6th and 7th they will be on display at the 4th Street Music and Arts Festival. The guitars are also for sale and a portion of the proceeds will benefit the 4th Street Music and Arts Festival.
Some of the artists and their featured guitars in the exhibit will be Martin Hardy-“The Mars Guitar”, Matt Johnson-“Stratogore”, Ibou Ndoye-Urban Noise”, Meghan McKee-“El Corazon” and  Mark Dalzell-“The Destroyer”. Also additional artists featured will be Karen Kosdan, Joe Chirchirillo, Kirk Bray, Hiroshi Kumagai, Andrea Artemis Morin, Dylan Egon and Jeff Spangler. Dalzell has definitely redefined the creative process with his concept of mixing music and art with his idea he has formulated creations like no other in the artistic world. Interested in viewing the guitars on display visit Metropolis Music located at 240 Newark Ave in Jersey City, NJ or for more information call (201) 222-8341.