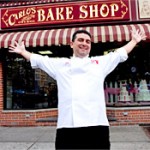 The Star of The Learning Channel’s Docu-Series Kicks Off the College’s  2009-2010 Lecture Series on Thursday, November 19th

Confectioner extraordinaire Buddy Valastro, the accomplished fourth-generation baker and the owner of Carlo’s City Hall Bake Shop in Hoboken, will be the first speaker in this season’s free Lecture Series at Hudson County Community College. Mr. Valastro will appear on Thursday, November 19 at 6:00 p.m. at the College’s Culinary Arts Institute/Conference Center, 161 Newkirk Street – two blocks from the Journal Square PATH Station in Jersey City. There is no charge for admission.

Hudson County Community College President Dr. Glen Gabert said the theme of this year’s series is “Reaching New Heights,” and that the other speakers are: Dr. Michael Eric Dyson, one of America’s most renowned authors and social/cultural observers who will appear on February 11, 2010; and Rita Moreno, one of only a few performers to have won all four of the nation’s major entertainment awards – the Oscar, the Tony, the Grammy and the Emmy – who is scheduled to appear on March 17, 2010.

“We are very happy that Buddy Valastro will be with us. We feel a special camaraderie with him because he is a Hudson County native, and because of our shared ties in the culinary world,” Dr. Gabert said, referring to the College’s acclaimed Culinary Arts Institute.

With the help of his family, Mr. Valastro has indeed, taken their bakery to “new heights,” and he has said he was “born into this business and practically has icing in my blood.” Mr. Valastro learned his trade of baking and decorating cakes by working as his father’s apprentice in the family’s bakery on Washington Street. Utilizing his father’s time-honored recipes and his own innovative decorating and sugar art techniques, Valastro has created cakes that are as delicious as they are elaborate and beautiful, including the circus-themed confection he created for Britney Spears’ 27th birthday. His creations have earned him and the family business national acclaim with stories in The New York Times and several national newspapers and magazines as well as appearances on Good Morning America, The Today Show, and the Food Network. The Cake Boss, which premiered on The Learning Channel last spring, chronicles Mr. Valastro’s desire to achieve his late father’s dream of making Carlo’s City Hall Bake Shop a household name.

Tickets for Valastro’s lecture will be available as of 11:00 a.m. on Monday, Oct. 19 for HCCC students, faculty and staff members from the College’s Office of Student Activities. Limited tickets will also be available for the public. For more information on the HCCC Lecture Series, please visit the College’s web site at www.hccc.edu or phone the Office of Student Activities at (201) 360-4199.