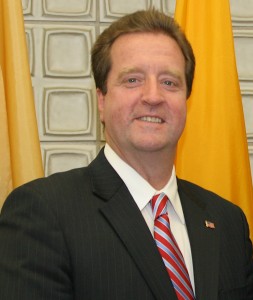 A Dedicated Mayor with Strong Values Talks to Our Sister Paper the Bayonne Observer about His Goas for Bayonne.

By Evelyn Bonilla- Photos by Steveamack.com

As a child born and raised in Bayonne, Mayor Mark Smith grew up enjoying all that his hometown of Bayonne had to offer. It’s way of life, its schools and the neighborhoods around him. The son of a Bayonne police officer and a nurse at Bayonne Hospital, he was taught to treat people with dignity and respect and to always put others before himself. These values were instilled in him and these are the values that he carries with him today. In retrospect, I’m sure he would’ve never imagined that his future would lead him down a path that would revolve around the future of Bayonne and its residents.

But now that he has received the support of the Bayonne community and he has officially been sworn in as Mayor, he’s prepared to make things happen. His goals and vision are clear and he has begun to put them into effect.  I recently had the privilege to sit down with the Mayor and discuss some of his goals for Bayonne’s future and current projects in progress that will in the future benefit Bayonne and its community.

I asked the Mayor about his short and long term goals for the City of Bayonne and he explained, “One of our short term goals is that we need to continue working on the reorganization of municipal government. We started that by moving some department’s directors and eliminating some departments and duplication services. We reduced our departments from nine to four.”

“We are also working on providing the public with some early evening hours, this will benefit residents who want to do business with the city or who have to do business and can’t because they work late or work in Manhattan.  We are thinking of a Flex time plan so that our employees are available to better serve the public.”

Another short term goal the Mayor and his administration are working on is there in house technology; they are currently working on updating their computer software system. By implementing this plan, it will allow other departments to share information on a real time basis and will incorporate everything into one centralized database. This will provide for quicker, faster and more accurate service to the community.

However, the main goal and focus for the Mayor and his administration is on Bayonne’s economic development, he explained, “One of the most pressing issues at this time is the structural deficit that this administration has inherited. Our objective is to develop a realistic plan to eliminate that.”

So, with that focus in mind the Mayor and his administration have already begun to target that issue. Some of the things they are looking at are shared services between various entities of the city as well as county and state, reforms in Bayonne’s waste management system and possibly fee structures for services that the city provides. Presently they’re focusing in on a comprehensive health benefit package for all city employees and elected officials. The goal is to make one comprehensive health care system that should show a lower number of health care costs.

In long term the Mayor is adamant on one particular goal and that is to pay down city debt. The goal for the administration for the next four years is to aggressively target how to pay down the city’s structural deficit. The mayor explains, “The goal for this administration is to whittle down a debt that we inherited. This is something that has to be done and that needs to be done! It will take courage and discipline, but if we stay the course, we will come out of this a stronger and better community.” In doing this the Mayor ask only for the support and patience of the community. He explained, “This is a tough road were traveling down, were going through this together, it’s important to have courage and faith that were going to get through this.”

It seems that the Mayor is definitely on the road to “moving Bayonne forward”.  Recently signs can be seen with the development of the new Bayonne Crossing shopping mall. A project that has yield up to 1,200 union building trade jobs with mall construction and is expected to offer 900 retail and management jobs. Also, the development of a several new businesses and banks which are in view throughout the town.

Looking toward the future Mayor Mark Smith is confident and determined to replicate some of what Bayonne once was, with his perseverance and the values that were taught to him as a child, he can be sure that he is on the right road. As he looks towards the future along with his administration, he hopes to work hard to ensure that the future generation will have a community that they can be proud and confident in.