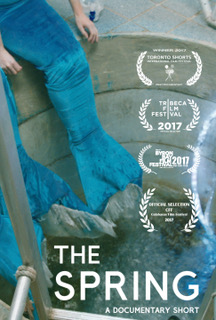 “I’m from South Florida, I grew up there,” Delaney Buffett says. “My parents told me about Weeki Wachee Springs when I was a kid. I remember I was discussing it with my dad. (Delaney’s father is Jimmy Buffett of “Margaritaville” fame.)  I didn’t believe him at first. I went on their website and talked to a couple of friends who made films. We were breaking out, making short-form content and short-form documentaries. My best friend Katie Corwin, and then my other friend, my roommate Chloe Corner and the rest of the crew of women went down there with me and we shot it there.”

THE SPRING is about the talented female swimmers who don mermaid tails and put on shows in a small underwater theater at Weeki Wachee Springs State Park in Florida. The shows are a huge tourist attraction and have been ever since founder Newton Perry, a U.S. Navy swim coach got the idea in 1947. Before he could train swimmers and teach them underwater routines, Perry first had to clear the spring of abandoned cars and rusted appliances dumped there by local residents. He eventually turned the spring into a mermaid cave with rocks and seaweed and discreetly placed air hoses for the “mermaids” to breathe oxygen under water. Today, the mermaids perform in a sophisticated 400-seat underwater theater.

“When we went down there we didn’t know what to expect,” Delaney Buffett says. “The mermaids perform an underwater ballet. They have tails on and they do tricks, drink Cokes underwater. One mermaid eats an apple. Its awesome.”

HCCC Cultural Affairs Director Michelle Vitale invited Buffet and the other women directors to screen their films in honor of Women’s History Month, she says. The festival, which opened on March 2nd, has enjoyed enthusiastic attention from the general public and HCCC faculty who are bringing students to see the films, she says.

“Some of the films are inspirational,” Vitale says. “It’s a special arrangement of films and filmmakers that Delaney brought together for the festival. You don’t have to be a woman to enjoy them either. One is about an environmentalist, the others are about LGBTQ life in the south, a mermaid community in Florida, a pregnant runner and a young wrestler. They run the gamut from sports to the environment.”

When creating the festival, Buffett took into consideration the diversity of HCCC students and the local community. Vitale says: “It’s a broad range of directors and material.”

The success of the festival has inspired Vitale to host another film festival at HCCC, she says. Meanwhile, she encourages local residents to stop by the 6th floor atrium in the HCCC library building and check out the work that’s being shown – and for some buttered popcorn, too!

“Everybody loves film,” Vitale says. “Film is very relatable. Every art has their special thing. With film, its an intimate experience.”