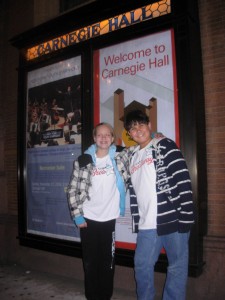 ” Just Too Marvelous For Words” was how two talented youngsters from Bayonne where feeling after being two of the one hundred performers from sixteen states to join Camp Broadway in A Johnny Mercer Centennial Concert on Friday Nov 20 at Carnegie Hall.

Taylor Purzycki, Horace Mann and Marc Wright, School 14 students have had the chance to personally experience and perform Johnny Mercer’s music this week at Carnegie Hall. The Mercer concert is the latest event celebrating the late, great lyricist and composer.

Conductor Steven Reineke of The New York Pops Orchestra led the concert with guest artists Ann Hampton Calloway, James T. Lane, N’ Kenge and the Camp Broadway Kids. The Camp Broadway Kids opened the show with Just too Marvelous For Words and also performed several of Mercer’s treasured compositions including Moon River, Dream, Accentuate the positive, and The Atchison, Topeka and the Santa Fe. All in all, what a terrific program!