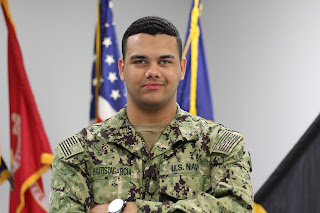 As a culinary specialist Bautista is responsible for food preparation and serving meals to the crew.

“I enjoy making my fellow shipmates smile at mealtime and knowing that I’m an important part of their daily lives onboard Thomas Hudner,” said Bautista.

“Thomas J. Hudner Jr., a naval aviator who retired as a captain, received the Medal of Honor from President Harry S. Truman for displaying uncommon valor during an attack on his element leader, the first African American naval aviator to fly in combat, Ensign Jesse L. Brown,” said Cmdr. Nathan W. Scherry, commanding officer, PCU Thomas Hudner. “On 07 May 2012, Secretary Mabus announced that DDG 116 will be named in Captain Hudner’s honor. Today, as the Navy’s finest 300 Sailors crew the 66th Arleigh Burke Class Destroyer, they do so with a tremendous amount of honor, pride, and sense of duty. We are extremely honored to be able to carry Captain Hudner’s values and legacy forward so that they are never forgotten. We are proud to be able to carry out our missions in defense of our country’s freedom and values, and humbled to be part of the Hudner family.”

Bautista has carried lessons learned from his hometown into his military service.

“Always maintain a positive attitude and believe in yourself no matter what,” said Bautista. “That’ll help you hurdle a lot of obstacles.”

With a crew of over 300 sailors, each crew member’s job is important to the smooth operation of the ship. The jobs range from weapon handling to navigation.

“I am the first in my family to serve in the military. Hopefully I’m starting something,” said Bautista.

Bautista’s proudest accomplishment is making his mother happy and proud during his boot camp graduation.

“I try to be a role model for my friends back in Bayonne,” added Bautista. “I want to show them that anyone can make their dreams come true and that opportunities are out there.”

Close living conditions build strong fellowship among the crew, Navy officials explained. The crew is highly motivated, and quickly adapt to changing conditions. It is a busy life of specialized work, watches, and drills.

As a member of one of the U.S. Navy’s newest ships, Bautista and other sailors know they are part of a legacy that will last beyond their lifetimes providing the Navy the nation needs.

“Serving in the Navy means everything to me, because I’m doing something that not everyone can do,” said Bautista. “I get to experience different things that will help me later in life to become a better person.”

The construction of the ship is over 98% complete. The ship is scheduled for commissioning in late 2018 in Boston, Mass. For more information about the commissioning, visit http://www.usshudnerddg116.org.