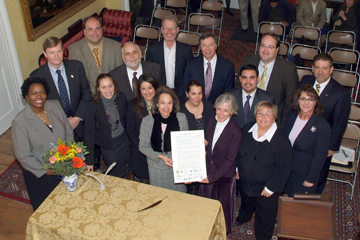 On Monday, March 23, 2009, senior executives from 16 of New Jersey’s Destination Marketing Organizations (DMOs) made a case for a 400% increase in the state’s tourism development spending at historic Macculloch Hall in Morristown.  Signing the Declaration of Destination, which detailed the economic development rationale for the program, the industry expects revenues to increase by $20 million as a result.

MORRISTOWN, NJ – MARCH 23, 2009 – Emboldened as one of the few industries to avoid cuts in the recently released state budget, Destination Marketing Organizations have signed the “Declaration of Destination,” setting forth an aggressive agenda that calls for an increase of 400% in 2010.

Leaders hailed the Division of Travel and Tourism and the Governor’s office for reversing years of policy and introducing a pilot program that allocated $1.9 million directly to local DMOs who qualified based on meeting a set of standards that included 25% of their grant matched by private local sources.   The DMOs are pointing to 2010 as the beginning of an era where the expected rebound of the tourism market can fuel New Jersey’s economy. Pointing to indications of early success, the signers of the Declaration are seeking a minimum of $8 million in 2010, which will allow them to demonstrate the impact tourism can have.

“Tourism generates almost $5 billion in tax revenues to the state on $37 billion in sales – and the entire budget to support the industry is currently only $6.5 million where Pennsylvania alone spends $30 million promoting its state,” says Jim Kirkos, president of the Meadowlands Liberty Convention and Visitors Bureau (MLCVB) and the group’s John Hancock.

“Research indicates that if we use $8 million for tourism development, we will generate $100 million in economic impact and at least $20 million in sales, income and special taxes to the state,” says Noreen Bodman, executive director of the Jersey Shore DMO and a former New Jersey State Director of Tourism.  “We will create 500 jobs.  We will accelerate downtown redevelopment, hasten beach recovery and enjoy dozens of benefits associated with travel and tourism.”

The “White Paper” study reports that New Jersey lags far behind neighboring states in tourism promotion and development and as a result misses opportunities to generate tens of millions in net tax revenues.  Coupled with the Declaration, the group urges the State to revamp its tourism investment strategy to accelerate the role of local DMOs and to restore a “competitive” budget for the State’s Division of Travel and Tourism.

“The good news is that this administration and this legislature is carefully analyzing the impact of the DMO pilot program and is looking for ways to grow revenues.  The success of our pilot programs and our new ‘White Paper’ argue for an expanded commitment from the state,” says Leslie Bensley, Executive Director of Morris County Visitors Center.  “We are starting now for 2010 so there is plenty of time to vet the issue before the next budget.”

“Somewhere along the way tourism was taken for granted, not unlike the Original 13 Colonies, and now we’re making sure we’re heard.  If our elected officials studied this issue they would conclude as we have, that tourism is an untapped revenue source.  We applaud the Governor seeing the pilot program through when he could have cut it,” says Mr. Kirkos.  “But the end of the pilot program has to lead somewhere in 2010, and by starting a dialogue now we will have plenty of time for our issue to be considered properly.”
# # #
——————————————————————————–
Statement made by Jim Kirkos, President of the Meadowlands Liberty and Convention and Visitors Bureau:

“Thanks everyone for coming.  Before we get started we need to thank our very gracious hosts, Macculloch Hall, for allowing us to gather here for what is perhaps not an historic occasion on the scale of others that have taken place here, but nonetheless important for New Jersey and the travelers who visit us.

“We chose this house because it, like New Jersey, is more than 220 years old.  This is the first time that representatives from independent destinations from across the state have gathered to speak in one voice.  Certainly, there have been gatherings where travel and tourism have been discussed and where our ideas have been heard.  But today is different because today we have arrived at a set of concepts that not only represent our shared views, they also represent the best interests of the State of New Jersey.

“In this fiscal and political environment if someone asked for a funding increase of 400% it would be dismissed as proof of greed or insanity.  Not-for-profit DMOs are not the residences for greedy people, so that either means the 16 of us are crazy, or we’ve got a point to make that is worth considering.  Or maybe both.  But seriously, I think we’ve supplied a convincing argument and certainly the results that we expect to deliver are not of selfish interest, but are what our state needs:  a growth engine whose results extend beyond improving our state’s economy and into supporting our heritage, our environment and our image.  Now that the research has been done and the proof is there, we are ready to commence the serious business of having the discussions we need to have with our legislature to elevate our communities through the advancement of our industry.

“So it is with the utmost respect for the Office of Travel and Tourism and Governor Corzine, who has been a great friend of travel and tourism, that I will begin this ceremony, John Hancock-style, by standing behind our mission and our objectives in the largest way I can, with my signature.”