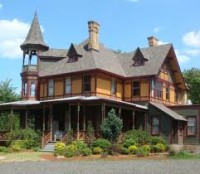 This week’s Top 10 homes spotlight at www.toptenrealestatedeals.com/ includes a beautiful old Victorian on Staten Island that some people say is haunted. Balthasar Kreischer owned a brick factory on Staten Island in the 1800s. He built two large identical mansions for his sons, Edward and Charles, but Edward later committed suicide and both the family business and one of the mansions burned down. In 2005, the surviving mansion was the site of a mafia killing ground where then-caretaker, Joseph (Joe Black) Young, was charged with the slaying of Robert McKelvey and sawing the body into pieces before throwing them into the furnace. Some say you can still hear Edward’s widow weeping in this mansion along with scratching sounds in a spot where children were punished, and a man and a woman ghost slamming doors. The home has been completely restored.

More Mitt Romney home news with details leaking about his La Jolla, California beachfront home scheduled to undergo an expensive renovation after the 2012 presidential election. The news that is getting a lot of late-night TV jokes is that Mitt’s new garage includes a car elevator, or as his campaign people described it to the New York Times: “a mechanism for storing cars in tight spaces.” The existing structure will be replaced by a new 11,062sf estate which will include a 3,600sf finished basement.

According to GOP insiders, Mitt Romney did not get the 2008 VP slot because the party leaders didn’t want a presidential ticket that owned 14 homes between two men – McCain had eight homes and Romney had six homes. If Mr. Romney does wants to add to his home inventory, a new luxury highrise in Florida will have an elevator that will take his car up to any floor – including the $9 million penthouse. Plans are now underway from Porsche Design Group to build a Jetson-type, 57-story tower in Miami Beach that will take your car up to your front door.
More home news is Taylor Swift’s recent purchase of a beautiful traditional southern plantation home in Nashville. Built in 1925, Northumberland Estate consists of a “Gone with the Wind” style estate and hundreds of acres of rolling pastures. It has played host to many luminaries such as Presidents Nixon, Ford and Reagan, along with a slew of famous country music artists. Taylor’s new place has four bedrooms and baths, a library, sunroom, molded ceilings and marble baths.

Also in this week’s Top 10: Gerald Ford’s former California golf home sold fast – Ginger Rogers also once lived there, the Hawaiian estate that was once the home of a princess is for sale, and the home where Michael Jackson’s died is on the market at $23.9 million.

Real estate is never boring at TopTenRealEstateDeals. Check out today’s most entertaining and unusual real estate news stories of the week at: www.toptenrealestatedeals.com/real-estate-news-headlines/ where you won’t get information about home loan rates or housing starts or stuff like that. Instead, we will bring you news such as a fancy dumpster home, Disney World’s new housing project, and the Florida girl who is only 14 and already a home owner.
We also have Top 50 Condo Developer Deals, the Top 10 upcoming home and condo auctions, and regional real estate agents’ choices for the best deals in their areas.