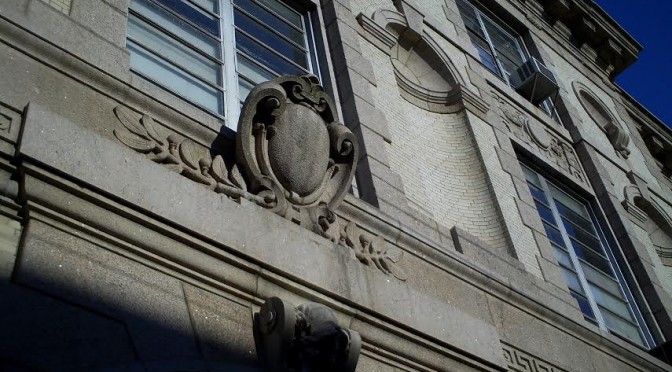 the architect overseeing the renovation Helena Ruman, and members of the library’s board and its foundation to impress upon distinguished guests the importance of the renovation project and of opening their wallets for a good cause.

Specifically, to bankroll about three years of work that will cost upwards of $10 million, according to Ruman, while the library is open to patrons. The updates include new barrier-free access to building and chairlift to comply with ADA requirements, new elevator shaft, mobile shelves and new desks and furniture for the library’s New Jersey Room, and new central air conditioning system. When Ruman was asked after the fundraiser if the older furniture and shelves in the New Jersey Room that date back to the early years of the library were going to be preserved, she would only say that many of the shelves were in need of replacement.

“This wonderful building was opened in 1901 and was constructed for $208,000,” Ruman told the guests. “We are spending millions to do the renovation of this building.”
Ruman and Gardner showed off architectural renderings of the future alterations to the main library. Ruman would later lead some of the visitors on a tour of the library’s four floors to not only view the wondrous designs and architecture of the various sections of the library but also to get a sense of how these elements, many of which have existed the building first opened, have fallen victim to time.

Some guests such as City Councilwoman Diane Coleman contributed on the spot by placing their donations of checks or cash in a large glass box that held all the donations that came in the past month.
Gardner told the River View Observer before the event started that the library has raised $7,385 since the fundraising campaign kicked off on May 13, with $4,000 coming from those who donated online through the crowdfunding website GoFundMe and the other $3,385 from checks written out directly to the library.

Also, $5 million in capital improvement funds from the city has been approved toward the renovation, which could start as early as September with the replacement of the library’s windows as well as the renovations that pertain to disabled access.

For more information about the renovation and the fundraising effort, visit http://jclibrary.org/