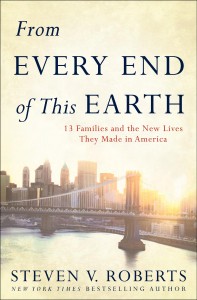 They say that home is where the heart is, and with that so is the true meaning of family. In retrospect life is a measurement of  “home and family” which in turn creates strong generations with amazing stories passed on from generation to generation.

Steven Roberts knows first hand the wonderful power of stories told from the past generation. Born and raised in Bayonne, NJ, he gathered inspiration from stories told to him by his father and grandfather, his grandfathers dreams and stories inspired the young Roberts to pursue his passion for writing and pushed him to explore the power of the written word. Robert explains, “I come from a family of great storytellers, my grandfather shared with me his many stories and dreams and my father also wrote.

Writing is in my blood, I felt the need to write at a very early age.”

Writing seems to be the gift that was handed down to the young Roberts, and looking back over the years, it seems he has used his gift well. Roberts worked at the New York Times for twenty-five years and at U.S. News & World Report for seven. Now a syndicated columnist, a commentator and a guest host on both National Public Radio and television, he continues to share his insight and knowledge with the public. A dedicated journalist for the past 40 years. he has won numerous awards, including the prestigious Dirksen Award for covering Congress, the Wilbur Award for coverage of religion and politics and the Bender prize as one of GW’s top undergraduate teachers.

In 2005, Roberts wrote a book entitled, “My Fathers’ Houses: Memoir of a Family” the book is a memoir of growing up in Bayonne, New Jersey, in an immigrant community. Within this book Roberts shares with his readers how he grew up in a house his grandfather built, growing up in an immigrant community in the shadow of the Statue if Liberty, and the story of how his father and his grandfather’s dreams and their own passion for writing and ideas influenced Robert’s future, and inspired him to seek his fortune in New York City, the media capital of the world.

Although these families are of diverse cultures, Roberts through his writing shows how each family is affected by leaving their country, culture and most of the time other family members behind. He explains, “It takes tremendous drive and ambition to try and make it in America”. “Imagine making the journey to America, planning and saving and then surviving.”

Drive and ambition is something that this talented writer certainly has, a true writer Roberts has shared of himself in his book, “My Fathers’ Houses: Memoir of a Family” and shared the stories of others in “From Every End of This Earth”. Dedicated to his roots and all that America has to offer, Roberts has continued the legacy his family started years ago and that is becoming one of America’s great storytellers.