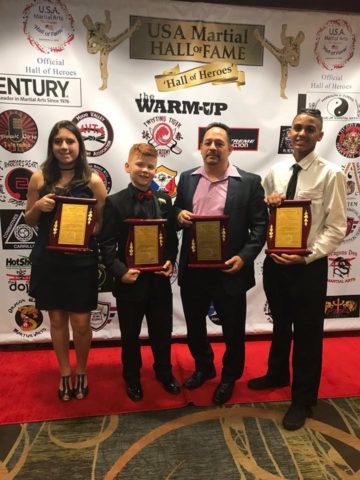 Head coach Austin Wright Sr. was recognized and inducted by the USA Martial Arts Hall of Fame Hall of Hero’s.

Wright was inducted in the category of “Grandmaster Leading by Example Award.” Wright is known for his “Spirit of the Dragon Warrior” because of his championship-leadership and CHI (Character, Humility, and Integrity).

There were several members of Team Wright who earned the Kidz Award at the Hall of Fame for their passion in karate, for team competition, winning national championships for New Jersey, and community service.

One of the Team Wright members who received the Kidz Award from the USA Hall of Fame was the 15-year-old Keith Hampton Jr.; he won the Outstanding Jr. Black Belt of the Year Award. The Top Rated Jr. Male Competitor Award was presented to Declan McCormick and the Top Rated Jr. Female Competitor Award was awarded to Cassandra Jedrzejczyk. All students mentioned are members of the UWA Martial Arts Federation of America and U.S. National Martial Arts Team “Alliance.”