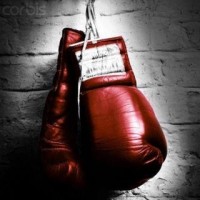 New Jersey Golden Gloves has announced its tournament schedule for the 2012 amateur boxing championship, including one show in Bergen County.
More than 200 boxers between the ages of 17 and 34 will compete in nine preliminary bouts throughout the state, beginning Friday, Feb. 24 at Brick Township High School. The winners will advance to the state finals, to be held Saturday, April 7 at the Prudential Center in Newark.
Dan Doyle, president of New Jersey Golden Gloves, said this year marks the first time in the franchise’s history that the finals are to be held in such a large venue.
“We are so excited to be holding our 2012 Tournament of Champions in the Prudential Center, giving our amateur boxers a chance to box in a large arena much like the pros,” Doyle, of Long Branch, said. “We hope the public will come out and support these athletes. They have dedicated at least the better part of a year to training for this prestigious tournament.”
Boxing Gloves photo:Source Bing.com
New Jersey Golden Gloves is a nonprofit organization that promotes the sport of amateur boxing, runs local tournaments and sends a team of the state’s best boxers to the Golden Gloves of America’s national tournament each year.
Doyle, a boxing coach and head trainer at the Middletown PAL, became president of the state franchise in June and immediately assembled a new board of directors who are working with him to better promote New Jersey’s amateur boxers and help create a scholarship program for their most promising athletes.
Doyle said many of his boxers are young men from areas around the state that have been hardest hit by cuts to community programs and the economic downturn. The clubs they join provide these young men and women with a low-cost training program that keeps them focused on a positive goal while offering a safe environment.
“If it wasn’t for these gyms and the volunteer coaches I would hate to think of what the alternatives would be for many of our athletes,” Doyle said. “Through boxing, their frustration and aggression has a constructive outlet.”
Doyle asked local businesses and residents to support these athletes by purchasing show tickets, becoming a tournament sponsor or making a tax-deductible donation to the New Jersey Golden Gloves Scholarship Fund. For more information, contact Daniel Doyle at 732-318-7131 or njgoldengloves@gmail.com or NJGG board member Stephanie Lashley at 732-531-1422 or info@icatacademy.com.
Major sponsors for this tournament include ASPIRA Learning Center of Newark; Bayshore Recycling Corp. of Woodbridge; ICAT Boxing, Fitness & Martial Arts of Ocean Township; Middletown PAL; and N.J. State Police Non-Commissioned Officers Association.
Tournament Schedule:
– 7 p.m., Friday, Feb. 24 at Brick Township High School, 346 Chambersbridge Road, Brick. Brick PAL, the event host, will honor Brick Township’s Frank Savannah, 1991 national Golden Gloves champion during the show. Tickets can be ordered online at www.brickpal.org or in person at the Brick PAL, 60 Drum Point Road, or at Girl Fight MMA, 1001 Fischer Blvd. in Toms River. Call 732-477-0144 for more information.
– 6 p.m., Saturday, Feb. 25 at Ibn Ali Boxing Club, 669 Springfield Ave., Newark. Call Ali Muslim Qawiy at 973-819-5554 to purchase tickets.
– 7 p.m., Saturday, March 10 at Thorne Middle School, 70 Murphy Road, Middletown. Tickets can be purchased at the Middletown PAL,1 Kings Highway, Monday through Thursday evenings or at the event.
– 7 p.m., Friday, March 16 at Luis Munos Marin Middle School, 663 Broad St., Newark. Call Aspira Boxing Club, the event host, at 973-484-7554 or Jose Rosario at 201-679-0485 to purchase tickets.
– 7 p.m., Saturday, March 24. Washington School, 3901 New York Ave., Union City. Tickets available at the door.
– 7 p.m., Friday, March 30 at IBEW Local 164, 65 W. Century Road, Paramus. Call Cassie Wordelman at 201-265-7273, ext. 213, or Theresa Rolaf at 201-265-1700, ext. 4246, to buy tickets or visit www.ibew164.org for more information.
– Saturday, March 31. Open date if needed.
– 7 p.m., Friday, April 6 at ICAT Academy of Boxing, Fitness & Martial Arts, 1304 Brielle Ave., Ocean Township. Call ICAT at 732-531-1422 for more information.
– 7 p.m., Saturday, April 7 at Prudential Center’s AmeriHealth Pavilion, 165 Mulberry St., Newark. For ticket information go to www.njgoldengloves.com or www.prucenter.com, or call Jose Rosario of the Aspira Boxing Club at 973-484-7554, Dan Doyle of the Middletown PAL at 732-957-9494, Stephanie Lashley of ICAT Boxing at 732-531-1422; or New Jersey Golden Gloves at 732-318-7131.
Tickets for each event range from $15 to $35 for general admission seats.
Share this: