PO2 (EOD2)(Explosive Ordnance Disposal) Mike Monsoor, a Navy EOD Technician, was awarded the Congressional Medal of Honor posthumously for jumping on a grenade in Iraq, giving his life to save his fellow Seals.

as his coffin was being moved from the hearse to the grave site at Ft. Rosecrans National Cemetery, Seal’s were lined up on both sides of the pallbearers route forming a column of two’s, with the coffin moving up the center.  As Mike’s coffin passed, each SEAL, having removed his gold Trident from his uniform, slapped it down embedding the Trident in the wooden coffin. 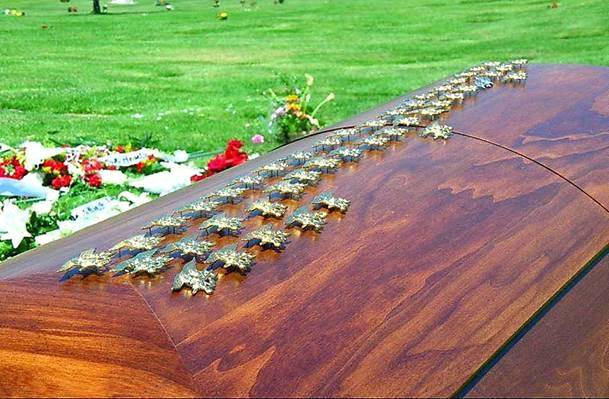 The slaps were audible from across the cemetery; by the time the coffin arrived grave side, it looked as though it had a gold inlay from all the Tridents pinned to it.  This was a fitting sendoff for a warrior hero. This should be front-page news and blogged about in the main stream media instead of some of the news we see every day.Since the main stream media won’t make this news, I choose to make it news.GOD BLESS OUR TROOPS

Thanks Mimi, Fred -2smooth and Charlene