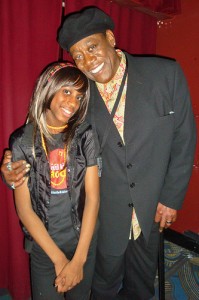 Pictured with Clarence  Clemons is Jersey City student, Jade Adams of P.S. 29, recently performed with legendary E Street Band member Clarence Clemons at a fundraiser held by Little Kids Rock on Oct. 22 at B.B King Blues Club in New York City. The “Right to Rock” benefit raised over $160,000 to restore and revitalize music education in public schools nationwide.
Adams, 12, performed Jailhouse Rock with Clarence Clemons and a student band from the Bronx. She also performed her original song, Change, with the student band, whom she met that evening. Adams’ song was selected as a grand prize winner in the 2009 Little Kids Rock songwriting contest.
Little Kids Rock currently reaches nearly 2500 underserved students in Jersey City and Newark, and over 42,000 nationwide. Here is a high-reolution photograph of Jade and Clarence at the event:

MONTCLAIR, N.J., Nov. 1, 2009 – Little Kids Rock, a national nonprofit music organization that provides free instruments and instruction to underfunded public schools, today announced the results of its “Right to Rock” fundraiser, held on Oct. 22 at B.B King Blues Club in New York City. The legendary Clarence Clemons found time between touring with Bruce
Springsteen and promoting his new book to help Little Kids Rock raise over $160,000 to restore and revitalize music education in public schools nationwide. Since its inception in 2002, the organization has grown to reach over 1,100 schools in 21 different cities as of the beginning of the 2009 school year.

“The great turnout at the Right to Rock event sent a message that was heard loud and clear: our kids matter, music matters and we are a growing community of friends and family who are stepping up to fulfill this generation’s obligation to the next generation,” said Dave Wish, executive director of Little Kids Rock. “Seeing a musician as iconic as Clarence Clemens share the stage with our students is something that I’ll never forget, and I am incredibly grateful for his support and the support of all of the guests that were honored last week.”
Little Kids Rock presented Clemons with the inaugural “Big Man of the Year Award” for his philanthropic efforts. Clemons performed an unrehearsed rendition of Jailhouse Rock with inner-city public school students from the New York City metro area, as well as Garden of Little Kids Rock Raises over $160,000 to Put Music Education Back in Public Schools 2 of 3
Memories with famed producer, John Colby. Additional guests honored at the event include Bill Mendello, CEO of Fender Musical Instruments Corporation, Betsy McLaughlin, CEO of Hot Topic, and Mary Luehrsen, Executive Director of NAMM, for their continued support of music
education.
“More than 50 percent of kids who play an instrument go on to college, yet music education programs at the inner city public schools who need them most continue to be hit hard with budget cuts,” said Clarence Clemons. “Little Kids Rock has responded to this problem in a really big way and made a positive impact on the lives of literally thousands of low-income
students who wouldn’t have otherwise had the opportunity. I strongly encourage those who are in a position to do so to support their cause and spread the word about this inspirational program.”
The event featured music performed by NYC HitSquad, a group whose members have played with Billy Joel, Bon Jovi, Joan Jett and the Blackhearts, Southside Johnny and the Asbury Jukes and the Saturday Night Live Band. 12-year old Jade Adams of P.S. 29 in Jersey City
performed her original song, “Change,” with a student band from P.S. 83 in the Bronx, whom she met that evening. Guitars signed by Eric Clapton, Slash, Bon Jovi and Paul Simon were also auctioned to benefit the program.
High-resolution photographs are available at: http://www.flickr.com/photos/36973804@N06/sets/72157622717341470/
About Little Kids Rock Little Kids Rock is a 501 (c) (3) nonprofit organization that transforms children’s lives by restoring and revitalizing music education in underfunded public schools. Little Kids Rock was
founded in San Francisco in 2002 by David Wish, an elementary school teacher who had grown frustrated with the lack of music education funding at his school. Today, Little Kids Rock is one of the leading nonprofit providers of free lessons and instruments to low-income children in US public schools, and has served more than 85,000 students at over 1,100 schools in 20 cities nationwide. Little Kids Rock Honorary Board Members include Bonnie Raitt, Slash, Paul Simon, B.B. King, Ziggy Marley, and other famous friends in the music industry. More information can be found at: www.littlekidsrock.org and www.littlekidsrock.tv.

About Clarence Clemons Clarence Clemons, affectionately known worldwide as The Big Man, has captivated audiences for over forty years with his distinguished ability for making his saxophone speak a universal
Little Kids Rock Raises over $160,000 to Put Music Education Back in Public Schools 3 of 3 language. For more than three decades Mr. Clemons has lofted Bruce Springsteen’s E Street Band to become, as some have deemed it, the greatest rock and roll band in the world. In addition to an ever-lengthening roster of live concert performances and recording projects, his credits include a growing portfolio of dramatic and comedic appearances, for both film and television.
On October 21, Mr. Clemons releases his book, co-authored by his friend, Don Reo, Big Man: Real Life and Tall Tales. This is the first book written by a member of the E Street Band, telling true, unknown stories about the band as well as capturing Mr. Clemons’ larger-thanlife storyteller persona in a series of hybrid fact-and-fiction stories called “Legends.”

One thought on “Little Kids Rock Raises over $160,000 to Put Music Education Back in”