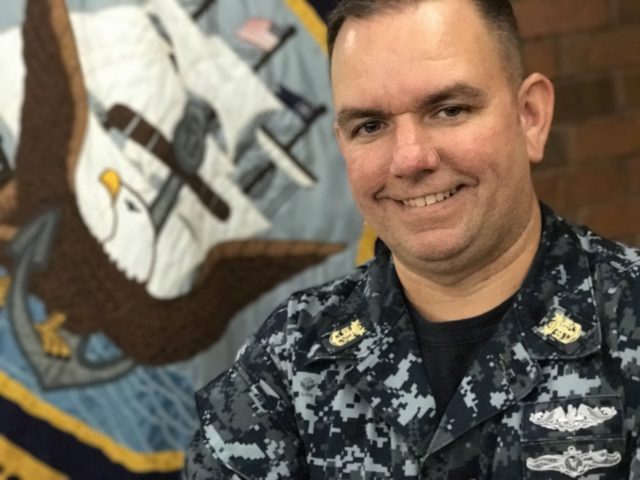 Kings Bay, Georgia – Master Chief Petty Officer Tom Curtin from Jersey City, New Jersey, enlisted in the Navy in 1996 and has spent nearly a third of his career on nuclear powered submarines.
After completing his initial training, Curtin reported to USS Tennessee (SSBN 734) and completed nine strategic deterrent patrols from 1998 to 2004. He moved through the ranks quickly—promoting from seaman to first class petty officer—while onboard Tennessee.

Curtin’s next at sea assignment was onboard USS Georgia (SSGN 729) where he completed five more missions from 2007 to 2013. He is currently assigned as Chief of the Boat (COB)—the senior
enlisted sailor—onboard the ballistic missile submarine USS Alaska out of Naval Submarine Base Kings Bay, Georgia, and has completed one patrol with the sub.

Curtin serves as an adviser to the commanding officer and assists with matters regarding the good order and discipline of the crew as the COB on Alaska.

Being the COB on a nuclear powered ballistic missile submarine is a tremendous amount of responsibility. Curtin attributes much of the success of his career and his ability to lead his sailors to one defining moment that occurred while he was a junior Sailor.

“I messed up, but got a second chance,” said Curtin. “So remembering that I have a past helps me relate with my junior Sailors.”

Curtin said that one of the lowest points in his nearly 21 year Navy career was missing ship’s movement on September 9, 2001, two days before the coordinated terrorist attacks that killed 2,996
Americans and injured over 6,000 more. Always keeping in mind that he made this mistake, Curtin now uses that mistake as a motivating factor in how he provides guidance to his Sailors.
“In my short time aboard Alaska, I’ve had one Sailor who has missed ship’s movement,” said Curtin.

Curtin said since his career had previously been affected negatively by making the same mistake, he took a particular interest in guiding the junior Sailor who had made the same mistake.
“Before I took him to captain’s mast I said, ‘you need to own up to your mistakes and be accountable for those mistakes, and take accountability for what you did.”

Curtin said he and that junior Sailor have met regularly since the incident, and Curtin believes that the relationship they have fostered through the unusual bond is helping to guide that Sailor to be more successful.
“Not everyone in the Navy has a father figure. And for some that do, they still need that fatherly advice,” said Curtin.

Curtin himself is a father. After marrying his wife Jennifer in 2015, at home he has his daughter, Harley, his two step-sons Chase and Cole, and recently, a two-year- old daughter, Reece.

“She is what motivates me,” said Curtin. “For the first two years of her life I wasn’t out at sea much, so I enjoyed being able to watch her grow up so far.”

Curtin said having a large family with a diverse age group has kept him young and has helped him relate to younger Sailors who are starting families.

“My family keeps me motivated to do good things, and to make sure that all of them get the best opportunities. They help me provide the best I can for my Sailors as well.”