The 2nd annual Bayonne Renaissance Festival happens Sat, July 22nd from noon to 7 pm and much of the entertainment is a step back in time. For instance, when was the last time you witnessed a joust, watched a pirate sing and dance, or caught a Celtic Magician dressed in a kilt breathe fire?

That’s just some of the fun Adam J. Semanchick, President of the Bayonne Theater Company and the Bayonne Renaissance Committee has up their chain mail sleeves when they turn the G. Thomas DiDomenico Park into an amphitheater filled with music, Shakespeare, games, food and lots of medieval shenanigans.

This is the second year for the Bayonne Renaissance Festival and Semanchick says 2017 is going to be a banner year for the event with more entertainment, more concessions, more children’s activities and special offerings for the adults, too. Couples that want to renew their vows will get their chance to say “I Do” once again at the Vow Renewal tent run by Gia Pace.

“We’ll have a little service; it will be Renaissance-themed,” Semanchick says. “It’s the first year we’re doing it.”

Moving things along throughout the day will be the Bayonne Theater Company’s troupe of 30 members performing their best wench and knight imitations along with a special Shakespeare performance of LOVE’S LABOUR’S LOST by Stratford-Upon-Duncan in Jersey City.

“The theater company has only been around three years,” Semanchick says. “We just did GOD by Woody Allen. It was well-attended. We did HOORAY FOR HOMOCIDE, a murder mystery. This started as a Shakespeare in the Park event and before you knew it, we were running a Renaissance Festival. Our first year we started out small. We’re getting bigger as we go. People join us and stick around.”

Three stages will be set up in DiDomenico Park with acts performing throughout the day, Semanchick says. The Gazebo will be used for Shakespeare’s LOVE’S LABOUR’S LOST by Stratford-Upon-Duncan. Other entertainers include Firebreather Daniel GreenWolf.

“This year we’re adding jousting, archery, a blacksmith, a fiddler, a bar band, and a local art show,” Semanchick says. “Our art curator Erin Kachmar runs the Jewish Community Center Art Gallery in Bayonne. About 30 artists, all Bayonne & JC artists., will be displaying their works.”

BCB Bank and Carepoint Health are sponsors for this year’s event, Semanchick says, and the theater company has been scouting acts for the event.

“We’ve been pulling acts from other Renaissance Festivals,” Semanchick says. “We’ve been scouting around and and got to meet some really cool acts. And we brought every act back from last year.” 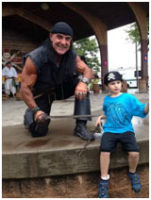 Along with firebreather Daniel GreenWolf, other entertainers will be knife-thrower Doug Stafford who also does the Philadelphia Renaissance Fair; the Valhalla Pirates featuring live cannon fire. (The leader of the Pirate crew is chiropractor Charles Waldron of Bayonne.) The Knights of Avalon will perform sword fights and the Crimson Pirates featuring Dan O’Driscoll of Bayonne will also be featured. Another musical act to take the stage will be Three Pints Shy.

“They’re a really funny band,” Semanchick says. “They’re from Manhattan. They’ve been at the the New York Renaissance Fair for more than 10 years.”

Also on hand, Blacksmith G. Paul Salvetti from the Red Mill Museum in Clifton and archery by Jersey City Archery.

There will be a costume contest, and more than 30 vendors selling food, drinks, fairy wings and flower crowns. The Vic Tavern of Bayonne will have a beer garden set up and an art show is also planned. In addition, jousting will be performed by knights of the Round Table Productions of Pennsylvania.

“They’re high profile,” Semanchick says. “They used to do the Renaissance Fair in New York.”