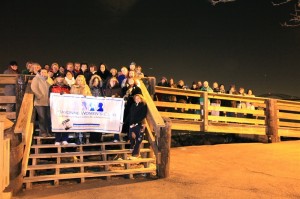 Since its inaugural meeting on January 27, 2010; the club has received an enormous response; rising from 40 members to almost 300 members in 2011.  Asked what she thought has attributed to its success, Diane Brennan, a member of the steering committee, explained, “In my personal opinion, I feel that woman are ready to promote good will, their ready to help build a strong community.” I’ve been involved within the community for the past 30 years, I love Bayonne!  The time is right for women to have a voice, not just for our city of Bayonne but also for themselves.”

Mary Kay Tokar one of the clubs founding members, also explained as to the clubs success, “The response to the Bayonne Women’s Club has been overwhelming! It’s amazing how many women are willing to give back to the community. It’s heartwarming that our idea had taken to heart. I think with the Bayonne Women’s Club we will become a big force in helping our community.”

The clubs mission statement is clear, it reads, “The Bayonne Women’s Club, empowering today’s women for a better tomorrow, by improving the lives of women in our community, through charitable and humanitarian acts.

In keeping with their charitable and humanitarian acts, on April 9th the BWC will lend a hand to Assumption Church in Bayonne assisting with their Soup Kitchen. On June 17th, they will hold a “Relay for Life” event which will benefit individuals with cancer and on Sunday, March 20th they will march in the St. Patrick’s Parade in Bayonne, NJ. The BWC would like to thank Dave Lipyanka from Creative Edge for their banner, which they will be carrying in this year’s parade.

It seems that the Bayonne Women’s Group will be an asset to woman all over Bayonne and to its city. Their goals are clear; to bring women together, to help their community and to pave the way for a new generation of women in Bayonne.

Interested in attending a meeting of the Bayonne Women’s Club, their meetings are held every first Thursday of the month, at 7pm at The Catholic War Veterans at 18 West 23rd Street, just off Broadway. Also to become a member you can call the office of Dr. Mary Dunlap Beales at (201) 339-8803 and state that you would like to become a member of the BWC.

The club also has a page on Facebook entitled, Bayonne Women’s Club which can be found at by logging into Facebook at BayonneWomansClub@groups.facebook.com