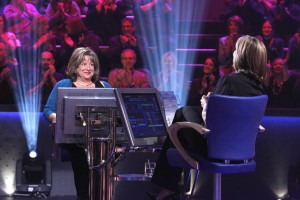 The Actress …No! the Realtor

Barbara Eden, a real estate agent from Jersey City, NJ will be a contestant on a special edition of “Famous Names Week” on “Who Wants To Be A Millionaire” on Tuesday, May 5 and Wednesday, May 6, 2009. Hosted by Meredith Vieira, “Millionaire” can be seen locally in the NYC area on WABC (ABC), weekdays at 12:30PM.

For the first time ever, “Who Wants To Be A Millionaire” will showcase ordinary people who share their name with a famous person as they try to cash in on their newly found fame in the “Millionaire” hot seat. Other contestants appearing on “Famous Names Week” will include:

* Jesse James (Soldier in the U.S. Army from Harlem, GA)

* Barbara jokes that she doesn’t look much like “Jeannie” and she “definitely can’t fit in the bottle” – but she’s hoping to “blink” her way to winnings $1,000,000 in the “Millionaire” hot seat!

* As a real estate agent, her clients always get a laugh every time her cell phone rings, since her ringtone is the “I Dream of Jeannie” theme song!

* Barbara once got a request for an autographed photo from an elderly woman in a retirement community. Barbara felt so badly that she wasn’t the “real” Barbara Eden, that she called the retirement home to explain the mix up.

* Three days before getting the call to be on “Millionaire,” a pipe burst and Barbara’s house was completely flooded. She’s hoping to win enough on “Millionaire” to help repair the damage and remodel the bathroom.

* Barbara is married to her husband Mike, who came with her to NYC and sat in the “Millionaire” audience as her on-air companion for the show.

* If Barbara wins big on “Millionaire,” she said she would love for both she and her husband to be able to retire in the next few years. She would love to give him a much needed break – and besides, he’s the one who made her “Barbara Eden,” which is how she ended up in the hot seat to begin with!

* New for this season, the “Ask The Expert” lifeline enables contestants to connect with a pre-determined “Expert” via a live face-to-face Skype video call on any question past the $1,000 level. Billy Bush (co-anchor of Access Hollywood) will sit in as the “Expert” in the episode airing Monday, May 4. Game show legend, Ken Jennings, will take over as “Expert” for the rest of the week, May 5 – 8.